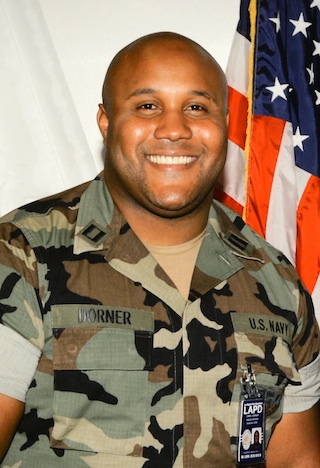 On the heels of the city of Riverside rescinding their offer of $100,000 to the fund, a law enforcement-oriented group is likewise taking their money out of the collective pot. The Associated Press reports:

The board of the 64,000-member union Peace Officers Research Association of California rejected paying its $50,000 share because Dorner, whose four victims included two police officers, died before he could be arrested or convicted, President Ron Cottingham said Friday.

While once upon a time in the wild, wild west rewards were offered to bring in criminals "dead or alive," the issue with the Dorner reward rests in semantics.

While there had been some contention about the intent and phrasing of what the reward money was to go to, "arrest and conviction," or "identification and capture," for example, LAPD Chief Charlie Beck ultimately assured the public the money was for the "capture and conviction" Dorner, a statement that is now being thrown back in the LAPD's face by donors backing out.

Cottingham said the group's contribution was "on hold" recently as word surfaced there were donors who were rethinking their donations.

Another issue for some donors has been the matter of who is seeking to claim the reward, who believe unseemly profiteers are exploiting their experiences with Dorner to cash in.

So far, there have been two claims on the money. One from Rick Heltebrake, the camp ranger who was carjacked by Dorner, and the other by the couple who were tied up in their own cabin by Dorner before he took off in their vehicle.

An announcement regarding who will get some or all of the reward money is expected from L.A. officials in April.