Feds Crack Down on Sales of Nitrous Oxide in L.A., Seize $20M Worth of Party 'Nozz' 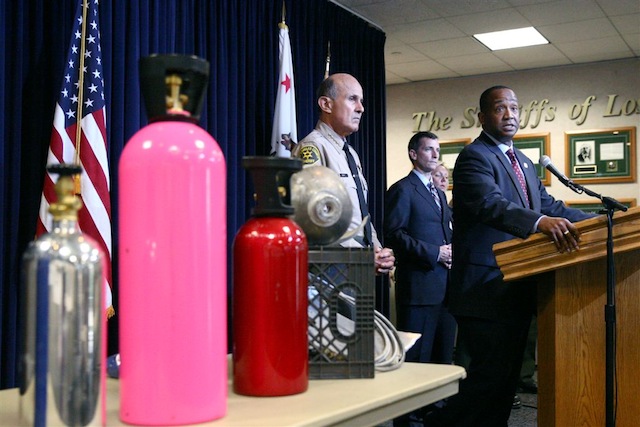 A joint effort of federal authorities and the Los Angeles County Sheriff's Department has resulted in the execution of 26 search warrants and a handful of arrests in conjunction with the sale of nitrous oxide for use as a recreational drug. Among those busted: A teenager having a home "Nozz" party he promoted on social media.

An investigation called "Operation No Laughing Matter," focused on several L.A. stores selling nitrous oxide under the guise of its use for welding or car racing, however those businesses were found to be distributing the gas for use as an intoxicant, mostly by attendees of "rave-style" parties, according to the LASD.

Two criminal complaints focusing on four defendants say the businesses "misbranded" the gas, claiming those store owners "are distributing nitrous oxide for personal use without a prescription and in containers that do not include proper warning labels."

Four arrests have been made in relation to those complaints: Edward Valencia, 51, of Lynwood; Federico Valencia, 58, of South Los Angeles; Rose Marie Cuellar, 20, of Florence-Graham; and William Victor, 65, of Northridge. All four are due in court in April.

In total, 17 businesses located in multiple SoCal counties were served with search warrants. 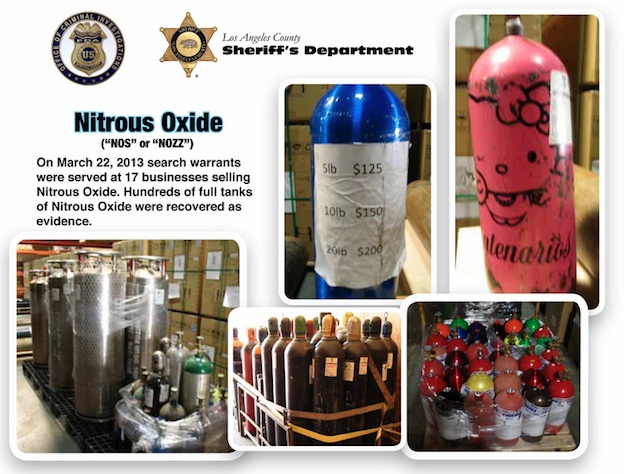 The LASD break down the numbers when it comes to the gas seized as a result of the search warrants:

Over 650 nitrous oxide tanks, mostly 64 pounds each were recovered as evidence by federal Food and Drug Administration investigators, loaded onto tractor trailers, and transported to a holding facility. Thousands of gallons of nitrous oxide was seized including approximately 12,000 and 25,000 gallon tanks. The nitrous oxide that was recovered as evidence on March 22, 2013, was estimated to be valued at $10 million retail and $20 million when sold as a drug at parties.

The search warrants also yielded numerous other arrests, as well as other contraband items and infractions: assault rifles, stolen guns, cocaine, gas, unsafe NOS storage, and information about a 16-year-old's home "Nozz" party that had been widely promoted on social media.

That information led sheriff's deputies to the Whittier home of that teen, whose "Nozz" party was in progress while his parents were not at home. That teen was arrested by deputies for furnishing the intoxicating gas to minors.