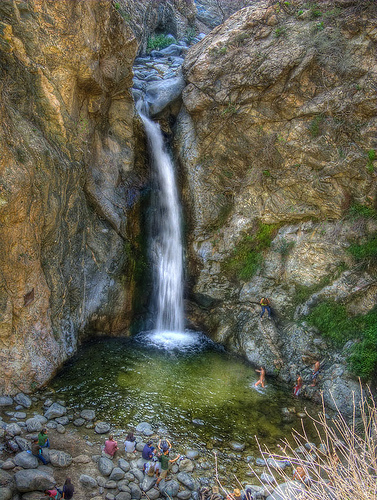 Photo by magnetic lobster via the LAist Featured Photos pool on Flickr
One girl was killed and another hiker was injured today on their hike in Eaton Canyon Park above Altadena.

Emergency responders got a call around 11:30 am this morning reporting that four people had fallen to some rocks below, according to the Los Angeles Times. One 17-year-old girl was reported dead, according to the Pasadena Fire Department. Another hiker was airlifted to the hospital. Somehow two other lucky hikers who fell were uninjured.

Los Angeles County Fire Inspector Quvondo Johnson told the Times, "When you go up to this Eaton Canyon, be careful. We get lots of incidents up there. It’s just a lot of hikers; a lot of them fall."

The hike to the second set of waterfalls seems to lure many hikers to their deaths, but it's not clear if these hikers were on the notoriously dangerous part of the hike. The Times says the hikers fell off a cliff not far from an entrance to the Altadena park, and it's not clear why they fell.

In any case, if you're planning a trip to the falls, it's worth brushing up on the park's deadly history.

Related:
Hikers Be Warned: Officials Caution Eaton Canyon Visitors When Climbing Near Waterfalls
Can We Prevent Deaths in Eaton Canyon?