Rapper Too Short's Drug Arrest: Not His Meth Because His Thing is Weed, Says Rep 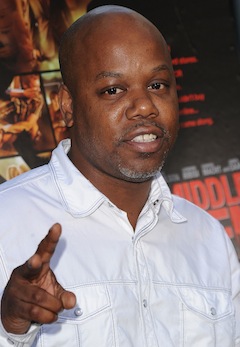 Too Short in L.A. in 2010 (Photo by Jason Merritt/Getty Images)
West Coast rapper Too Short was too slow (and allegedly too intoxicated) to evade arrest in Hollywood the other night, but now his rep is trying to get the word out the drugs connected to the music star in the bust weren't his.

46-year-old Too Short (err, aka Too $hort), born (in L.A.) as Todd Anthony Shaw, was pulled over at around 3 a.m. Wednesday, and after attempting to flee on foot, was arrested tossed in the back of a Los Angeles Police Department cruiser. Officers allege Shaw tried to ditch some drugs while in the car, but David Weintraub, Shaw's rep, says no way were the drugs his.

TMZ reports that their law enforcement sources say the drugs were most likely meth or Ecstasy laced with meth. Weintraub explains that Shaw was put into the "disgustingly filthy patrol car" that "smelled like vomit" and "was littered with remnants from prior arrests of the evening." Meaning, those drugs were left over from someone else who'd been in there that night.

Of course, the LAPD say they follow protocol and clean out the backseat after each arrest.

Oh, and PS, Weintraub can also explain away why Shaw tried to flee, crediting his client's past experiences being "mistreated by law enforcement."

Among Shaw's encounters with the law include arrests in 2010 in Boise for battery and in 2009 in Las Vegas for drunk driving.

Previously: Rapper Too Short Busted for DUI in Hollywood, Tried to Flee Cops and Dump Drugs