Lohan Takes a Plea Deal: Must Do Rehab, Community Service, Therapy and Probation 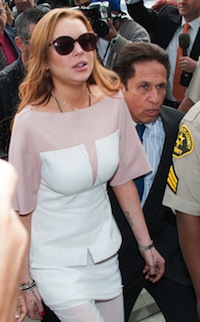 Lindsay Lohan arrives to her trial at Airport Branch Courthouse of Los Angeles Superior Court March 18, 2013 (Photo by Valerie Macon/Getty Images)
We now know what was being discussed behind closed doors this morning after Lindsay Lohan and her legal team arrived (almost an hour late) to court in L.A. today. Lohan has accepted a plea deal, and will avoid trial and jail time (for now).

Lohan has pleaded no contest to a pair of misdemeanor charges stemming from a traffic collision on Pacific Coast Highway in Santa Monica, according to City News Service.

The plea puts Lohan back on probation for two more years. Additionally, she'll have a 90-day stint in a locked rehab facility, must do 30 days of community labor, and undergo 18 months of psychotherapy.

So far, Lohan is staying clear of jail time, however, there's still a little something to resolve that could find her in the slammer. Lohan admitted to violating her parole instituted as part of the judgment in her Venice theft case, but sentencing for that—180 days behind bars—remains on hold. If Lohan can meet all the terms of this sentence (sound familiar?) she will not have to do that time.