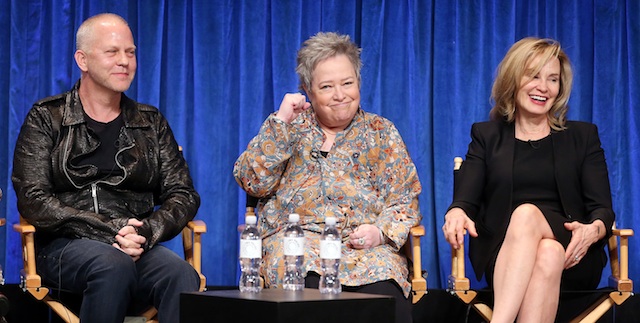 "American Horror Story" creator Ryan Murphy revealed key details about the upcoming third season of the show at a PaleyFest panel in Beverly Hills last night. The third season will be subtitled "Coven" and, unlike the first two seasons that were shot in studios and on soundstages, this season will be shot in New Orleans, Murphy said.

Murphy was joined on the panel by "American Horror Story: Asylum" cast members Frances Conroy, Naomi Grossman, Jessica Lange, Sarah Paulson, Evan Peters and Lily Rabe as well as executive producers Dante Di Loreto, Brad Falchuk and Tim Minear. But actress Kathy Bates showed up at the end of the panel and revealed that she would be joining the cast this season, according to the Associated Press.

Murphy told the audience, "The only thing I’ll say about the part is, you know, I wanted to see a lot of scenes with Jessica Lange and Kathy Bates going at it. So, that’s what you’re going to see."

Previously, Murphy told Entertainment Weekly that the upcoming season might include some romance: "Yes. There's a romantic element. I think the whole season I want to be funnier, romantic. But make no mistake, just when I think it's gonna be a little lighter, I find this great, true-life character that's the most horrible woman ever created."