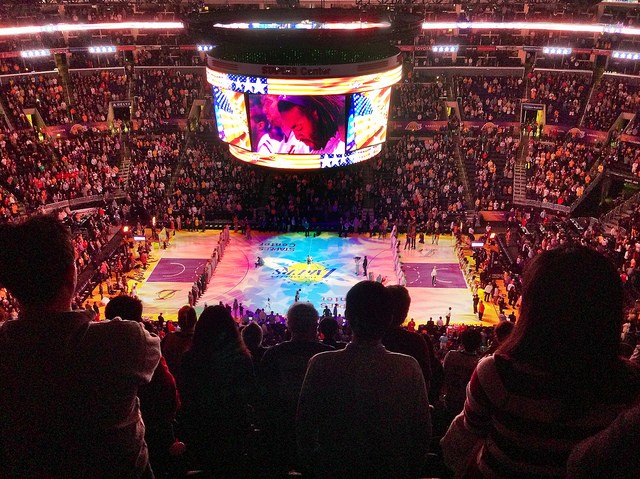 Inside the Staples Center (Photo by James CW Chang via Flickr)

Vegan sloppy Joes, veggie burgers, vegan sushi, grilled veggie sandwiches, couscous salad with veggies, and hummus and pita plates: No, this isn't the menu at the latest fast-casual vegetarian eatery to open up in Echo Park, it's actually what's on the menu at the concession stand at L.A.'s Staples Center, which has just been named the top Vegetarian-Friendly NBA arena in America. 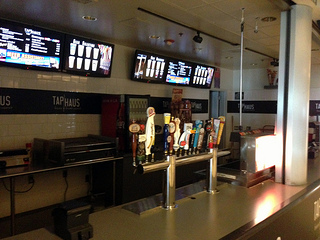 A concessions area at Staples Center (Photo by David Jones via Flickr)
The honor is bestowed upon the home court of the Clippers and Lakers by PETA, who are ranking NBA venues for the first time.

"Clippers fans may have more to cheer about this year than Lakers fans do, but one thing that fans of both teams can celebrate is the STAPLES Center's number-one ranking on PETA's inaugural top 10 most vegetarian-friendly NBA arenas list," says PETA Associate Director of Campaigns Lindsay Rajt. "Coming away from the concession stands with healthy, humane, and delicious vegetarian fare at the STAPLES Center is a slam-dunk."

Forget stiff competition on the court, the Staples Center had some other veg-friendly venues chasing their heels for the top spot. Coming in behind Staples was Toronto's Air Canada Centre where fans can cheer on the Raptors while chomping down on things like a chutney-topped Bollywood veggie dog, vegetarian burritos, and a lettuce, tomato, and scallion veggie dog. Third place went to the Philadelphia 76ers' Wells Fargo Center. You can see the whole list of 10 here.