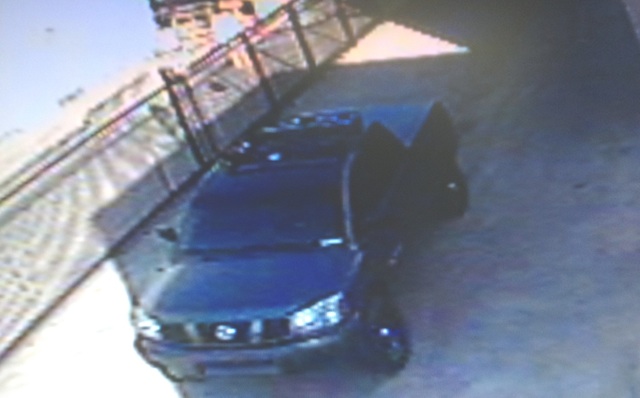 Photo of the Gray Nissan Titan truck Christopher Dorner is believed to be driving. The new plate is 8D83987 or similar. (Courtesy of the Irvine Police Department)

A suspect matching the description of Christopher Dorner, a fired LAPD cop believed to be on a shooting rampage targeting law enforcement, is barricaded in a hotel room in Point Loma, San Diego police said.

UPDATE 10:40 pm: NEVER MIND! Now San Diego police are telling reporters (including KCAL and Los Angeles Times) that the suspect who barricaded himself in a hotel is NOT Dorner.

The barricade situation was initially reported by KTLA. NBC San Diego reported that officers had responded to a hotel in Point Loma at North Harbor Drive and Spanish Landing Park.

Dorner, 33, was last seen in Riverside, where he was involved in a shootout with police at around 1:22 am. That shootout left one officer dead and another wounded. He has also been connected to the fatal shooting of a basketball coach at Cal State Fullerton and her fiancé.

Irvine police have released a photo of the vehicle that Dorner is believed to be driving. It is a Gray Nissan Titan with a ski rack, bed cover, aftermarket wheels (possibly black/chrome) and the license plate 8D83987 (or something similar).

Dorner is 33 years old, black, 6 feet tall, 270 pounds with black hair and brown eyes. He is considered armed and extremely dangerous, and police are asking the public to call 9-1-1 if they see him.

UPDATE 11: The US Marshals have left the scene of the hotel in San Diego. NBC San Diego has a photo of the man mistaken for Dorner:


Man who police thought was suspect was here on business. Said he was bombarded, put his hands in the air "quickly" twitter.com/LaurenSteussy/…