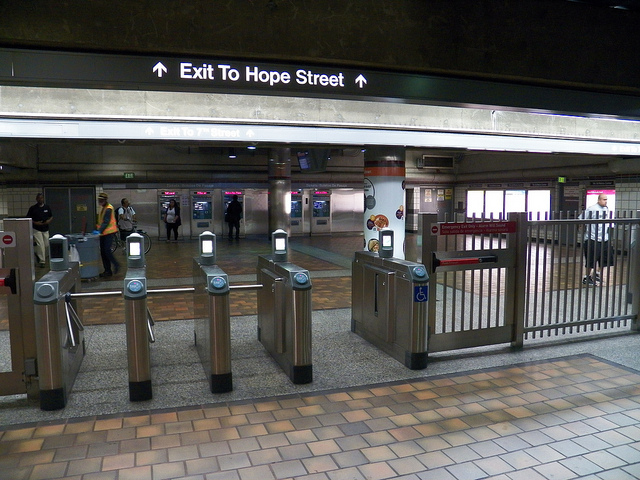 So you say you've had trouble getting acclimated to the mandatory TAP cards needed to catch a ride on Metro's rail lines? Well, you wouldn't be alone. The fare card system was apparently the focus of many rider complaints, and now Metro is doing what they can to make things more user-friendly.

According to the blog run by L.A. County Supervisor and Metro Board member Zev Yaroslavsky, users said they "couldn’t decipher the jargon and complicated instructions displayed on vending machine screens," while senior citizens struggled to determine how to get their reduced fare. Passengers who made transfers "protested inconvenient detours that, in some cases, force them to go long distances to tap their cards before returning to the train platform and continuing their trip." In short: UGH!

In response, Metro—the agency who loves to fix problems way down the line rather than foresee issues and address them before launch time—is actually doing something about it:

Metro is overhauling the signage around its vending machines in an effort to make the process clearer and also has tweaked the on-screen instructions for people trying to buy a ticket. Behind the scenes, a broader do-over of the computer screens is underway, with a series of focus groups offering input on how to create a truly user-friendly process.

For transfer passengers, you'll be getting "stand-alone-validators" set up where you can easily access them rather than hoof it on detour in order to follow the rules and TAP for each ride. (Too bad Metro isn't willing to make rail fares flat-rate.) P.S. even the guy at Metro in charge of TAP operations said the route march for transfer point TAP-ing "was ridiculous."

To make things easier on Metrolink riders who hop on Metro as part of their commute, the transit brains are working on a "paper ticket with an embedded smart chip," since Metrolink issues paper tickets.

We're in the countdown to more locked fare gates, with the Red and Purple Lines expected to be fully locked down by August, followed by locked turnstiles on the Green Line and portions of the Blue and Gold Lines.

In case you were wondering how many people still get busted for fare evasion, the Los Angeles County Sheriff's Department says of the 69,839 tickets they issued between February 2012 and the end of December, 94% of them were for people who tried to skipped paying.