Manti Te'o and the Fake Girlfriend: The Final Movement 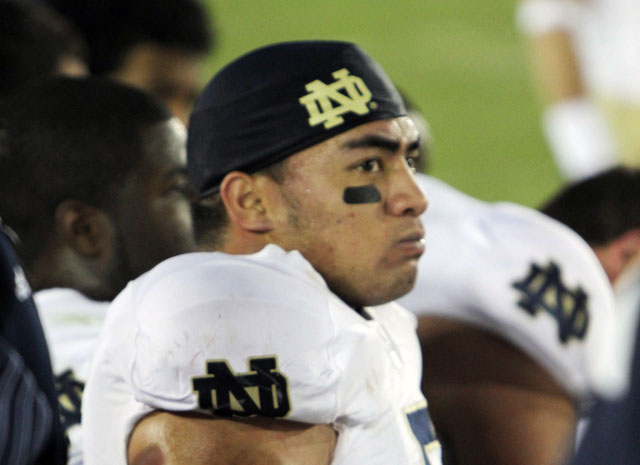 Manti Te'o sitting on the sidelines during Notre Dame's 20-16 victory over the USC Trojans at the Coliseum on Nov. 27, 2010. (Shotgun Spratling/Neon Tommy on Flickr, Creative Commons)

I was ready to watch Manti Te'o's confessional with Katie Couric. I had my snacks and refreshments laid out in front of me. I turned off my phones. I made sure my laptop was out of reach. It took me three minutes before I switched over to SportsCenter and moved on with my day.

When Deadspin broke the story last week, the first thing that popped in my mind was the JT LeRoy/Laura Albert saga. One of the fallacies in my original piece is that Albert has since disappeared. She has since taught at Dave Eggers' 826 Valencia and the California College of the Arts in San Francisco in 2012. She was the chief entertainment and travel writer for Bayinsider.com. So she's still alive and kicking. She even contributed to the MOTH with the following performance:

When the veil was lifted, the work Albert created as JT LeRoy still stood on its own. The work was always billed as fiction, and as fiction it still held up. You can still read Sarah today and feel the same gut-punch.

In an email exchange we had over the weekend Albert said, "I created FICTION books. I also brought the character to life. Oscar Wilde said, 'Give a man a mask, and he will tell you the truth.' Superficial people responded just to the mask of JT, so of course they were upset after the reveal."

Then, is it our superficiality that makes us angry at Manti Te'o? Also, why the hell do we care so much about this story?

There are really only two possibilities in this story with respect to Te'o. Either he is lying and was in on the Lennay Kekua story from the beginning to garner sympathy, or he really is that naive and believed Kekua was real up until the story broke last week.

In either case, so what?

If the first case is true, why do we care that he lied? Notre Dame has a history of creating mythology to bolster its esteem. What's one more? Even if Te'o used the story to win the Heisman Trophy, does that take away from the spectacular season he had in order to win that award? It's just publicity.

If the second case is true, then it matters to us even less. Albert wrote, "I was in love with JT LeRoy, and I was the person who created him. And I wasn't the only one who loved JT, either. Having to have someone in the flesh is not a requisite for love to exist; an imagination and an open heart are what's needed."

We allow fictional characters in our lives all of the time without second thought. As kids some of us had imaginary friends. As adults we're obsessed with characters from Friends or wanting to have cosmos with the girls from Sex in the City. We allow these characters to enter and shape our lives.

So Te'o believed in Kekua. Is a little compassion that horrible?

A lot of questions are arising about Te'o stock in the upcoming NFL draft. But who knows since the NFL has allowed a girlfriend basher to be drafted sixth overall?

To use a trite expression athletes love to use to make themselves sound smarter, "at the end of the day" it's Te'o's life. Who cares? After all it's not nearly as bad as believing the Lakers have any hopes of making the playoffs. right?