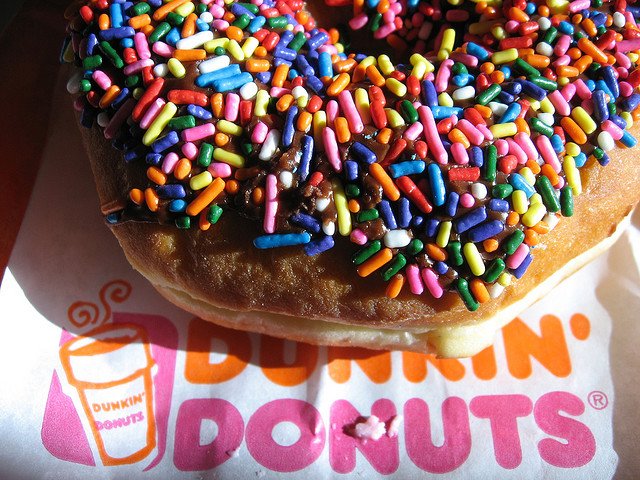 Dunkin' Donuts lovers in L.A., things are looking up! The popular donuts and coffee franchise announced today they are expanding to Southern California in a major way, and will be opening multiple locations in major markets, including in Los Angeles.

How soon can you expect to slurp down your DD coffee and chomp on a cruller? According to a release issued by the company, Dunkin' Donuts expects restaurants in Los Angeles, Riverside, San Diego, San Bernardino, Ventura and Orange counties to be open in 2015.

Dunkin' Donuts says they're now actively recruiting franchisees for those SoCal markets, and also are looking for "non-traditional venues" for their donut shops, "including colleges and universities, casinos, military bases, supermarkets, airports and travel centers."

When it comes to non-traditional locations, Dunkin' Donuts has used that as their only strategy in having a SoCal presence in recent years, thanks to their military base franchise operations, like the civvie-friendly one at Camp Pendleton.

Last summer, however, rumors of DD's intentions to woo the Cali market heated up, but seemed to dead end.

It's all about the slow and steady expansion for DD, who, once upon a time many years ago were here in L.A. (again, for the argumentative, there are NO Dunkin' Donuts in Los Angeles currently) but were forced out by the powerful mom-and-pop market, as well as our dominant local chains. But it's finally time to come back, says Nigel Travis, CEO of Dunkin' Brands and President of Dunkin' Donuts U.S., who explains: "Expansion to California has always been part of our plan to grow Dunkin' Donuts' presence in the U.S."

So patience, Dunkin' Donuts fans. You'll have yours in L.A. hopefully in a couple of years. It's real, and it's happening.