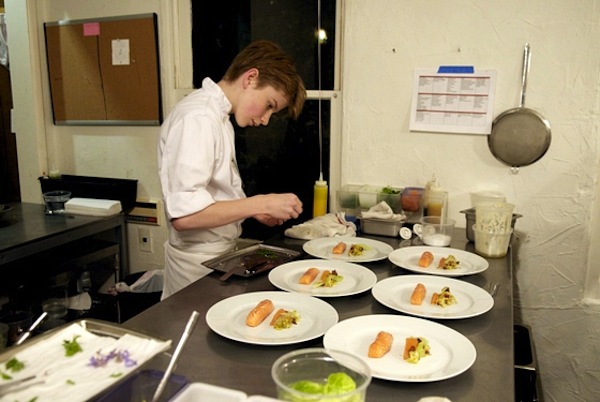 Remember that pint-sized chef Flynn McGarry that hit the pages of the New Yorker before hitting puberty? Well, he's launching his pop-up called Eureka over at acclaimed Austrian restaurant Bierbeisl in Beverly Hills starting January 30. And he's charging $160 a head. Sure beats allowance.

McGarry is known for staging with some of the world's best chefs, including Daniel Humm (Eleven Madison Park and the NoMad in NYC) and Grant Achatz (Alinea, Next and the Aviary), and at a very young age.

Spending so much time in a kitchen as a teenager might be common practice for European chefs like Wolfgang Puck and even Bierbeisl's own Bernhard Mairinger, but it's not so common here. Our youth are too busy tinkering with iTunes and Facebook to be distracted by such crazy things as professional goals and elbow grease. It's nice to see a kid so inspired, even if it makes us feel guilty for our lack of ambition at that age. If we were in the business of matchmaking, we'd think this go-getter and 15 -year-old vegan vlogger Clara Polito would make the most adorable teenaged foodie couple. But that's none of our beeswax.

What is, though, is the food. There will be two seatings, one at 7:00 p.m. and one at 8:00 p.m. McGarry will be serving a winter menu of "snacks" and eight courses plus desserts by guest pastry chef Josh Graves, who we've gushed over not only for his work at Ray's and Stark Bar as well as C + M Coffee at LACMA. (His dark chocolate mousse, caramel sauce, milk chocolate whipped cream, praline, chocolate sorbet, hazelnut brittle still stands as one of our favorite desserts in town.) Graves is also a young gun at only 25 years old.

You can make reservations here.