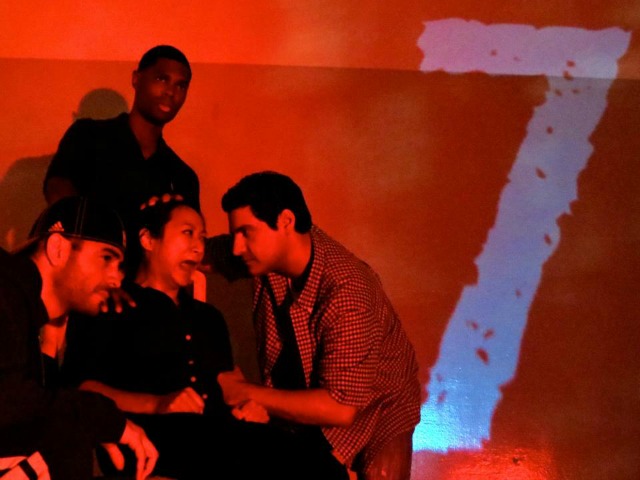 The entire cast is quite young, but they share an undeniable onstage intensity that is full of raw energy and narrative passion. As the central characters Ezequiel Guerra, Mathew Hancock, and Hugo Medina metaphorically invoke Plato's three fates with each bringing individual precedent to their singular entity of close-knit friendship. Guerra insightfully infuses the role of Lupe with a complex melange of plucked bitterness and sullen reverie. As Gonzo, Hancock culls carefully plotted humor, animated charisma, and violence-seeking abandon to illustrate lighthearted hopefulness despite suffering. Playing Lincoln, the most compelling character in the production, Medina is curiously esoteric and engaging and pulls viewers into Lincoln's muddled depth and longing.

The many female roles flexibly played by Mariel Martinez and Anne Yatco are deuteragonist in nature, but brimming with an undercurrent of archetypal strength. Martinez masterfully depicts agony with heartbreaking realism, while Yatco throws down energized might with fear-inducing immediacy, proving that machismo isn't just for the boys.

Cedillo's direction of 7, Eight, 9 is dark and fluid, becomingly purposeful, and staged with graceful precision. The affectingly personal nature of this staging is obviously and thankfully treated with touching delicacy and an awareness of the ethereal fragility that both art and life share.

Fight choreography by Doug Oliphant, lighting by May Mitchell, and set design by Jay Africa blend together beautifully to create a simple, but striking context for the production's narrative.