The Geminids, The Year's Best Meteor Showers, Peak This Week 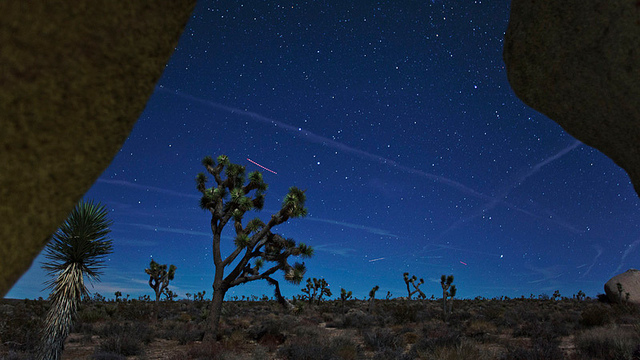 The Geminids in Joshua Tree, 2010 (Photo by evosia via Flickr)

The Geminid Meteor Showers, touted by Space.com as the "Year's Best Meteor Shower," are set to peak this week. Specifically, the night of Wednesday, December 12 is when the annual event is going to be at its best and brightest.

What are the Geminids? Space.com explains:

The Geminids, unusually among meteor showers, are the leftovers of an asteroid (most showers originate with comets). They are caused when rubble from the asteroid hits Earth's atmosphere, lighting a path through the sky as it burns up.

The Watchers offers this timeline of Geminid activity for 2012:

Observing at the Northern Hemisphere started as early as December 6, when one meteor every hour or so could be visible. During the next week, rates increase until a peak of 50-80 meteors per hour is attained on the night of December 12/13. By December 18 meteor shower disappears in the vast space.

Alas, the absolute peak time will be at 5 p.m. local time on the 13th, so Angelenos won't have the best seat in the house ("those in Europe and North Africa east to central Russia and China are in the best position to catch the very crest of the shower," says The Watchers).

Actually, it can be tough to catch meteor showers from within the city proper, so serious skywatchers are going to want to hit the road to get a better look—or shot, if you're going for photos. You could make the drive to the desert, as NBC4 suggests, or, wind your way up the hills on Angeles Crest. If you opt to take a drive to get a better view, please take caution and keep your eyes on the road.

Locally, Griffith Observatory's Sky Report has some tips and info: