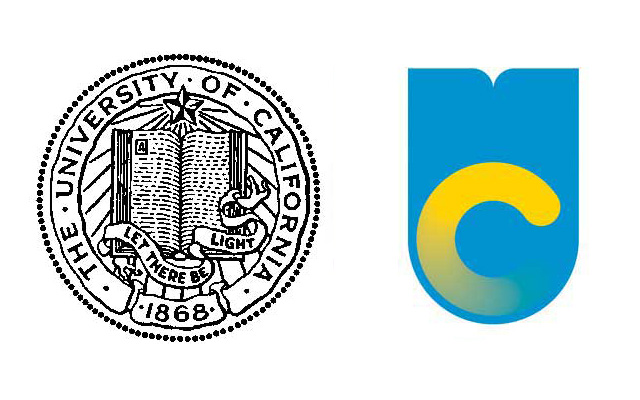 After nearly a century and a half of presenting themselves with a perfectly academic-looking Victorian seal, the University of California School system has supplanted the open book and shining star motif with a new, more "modern" and "user-friendly" logo. Unfortunately, no one seems to like it.

The logo was quietly introduced last month as part of the 10-school system's ongoing "Onward California" re-branding effort. Although no one on the campus of U.C. Berkeley had apparently heard about the effort last week, the new slogan boldly announces: "Whether you know it or not, the University of California, or a UC grad, has probably played a part in your day." The campaign hopes to raise awareness of the UC system's impact outside of academic settings and in everyday environments.

As any user-friendly design should, the new logo comes in an array of colors — one for each of the UC Schools. The design itself was created by an in-house team and is designed to look better when used in digital and print materials. As one representative from of UC's Office of the President (now proudly sporting the logo on its website), the UC system needed a fresh new look because, "there's nothing static about an excellent university." To show they're serious about the slick new look, the University of California even made a promo commercial that looks like it could also be promoting a new line of hybrid cars:

Naturally, outrage over the new design hit the Internet where some wondered what could possess the UC System to create a logo that looks like a toilet down which their tuition dollars are being flushed:

Hmm, wonder how much the University of California spent on "image consultants" to come up with this ugly new logo... fb.me/yuwVQscR

As it turns out, the in-house team worked at no extra cost to the University system, which might say more about the logo than a thousand angry tweets. Still, no less than four Facebook groups have already popped up, opposing the new design and a Change.org petition imploring the University of California to stop the new UC logo has already gathered over 40,000 supporters.

For their part, the administration says the new logo is not intended to completely replace the 144-year-old seal, which will still find life on diplomas and other official documents. Rather, it should be viewed as visible trademark that extends the school's presence into the real world, reminding people of the school's importance and ultimately bringing in more fundraising dollars. UC Marketing Director Jason Simon even responded to the haters on the Change.org page by appealing to every Californian's casual sense superiority: "The new mark was created as a part of our broader efforts to build awareness and support for all the things that UC does to make California (and by extension the world) better."

However, as the East Bay Express accurately points out: It's not just the new logo that should bristle UC students and alums everywhere, but the corporate feel that the logo suggests. Which is a much bigger issue to deal with than an unpopular brandmark.