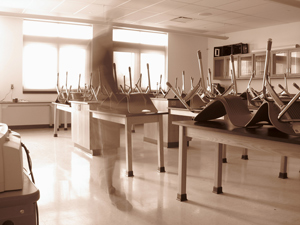 Photo by ben+sam via Flickr
In the wake of what seemed like an endless wave of revelations earlier this year about public school teachers being investigated—and arrested—for child abuses that took place in the classroom, California state senator Alex Padilla introduced a bill that would make it easier to get abusive teachers off the payroll. That bill dead-ended in June, but today Padilla intends to reintroduce a slightly revised version of the bill.

Last week, Padilla announced his intentions to put forth SB 1530 once again just one day "after a state audit on L.A. Unified's child abuse procedures found the lengthy dismissal process increased the district's likelihood of settling the allegations in exchange for resignations," according to KPCC.

For this renewed effort to get SB 1530 on the books, Padilla intends to "narrowly tailor" the bill, and also "seek input from both the California Teachers Assn. and United Teachers Los Angeles." Both education organizations had fought SB 1530 this spring.

As previously penned, SB 1530 would have facilitated a speedier "dismissal process for certificated school personnel in cases involving sex abuse, drugs, or violence against children," summarizes Padilla. The bill called for a change of law to allow school districts the ability to suspend or terminate an employee during the off months of summer, and give the school district the final say in firing a teacher who has been abusing drugs or students.

In the LAUSD, aggressive investigation of alleged teacher misconduct has skyrocketed ever since a teacher at Miramonte Elementary School in South Los Angeles was accused of feeding his semen to his students. The Miramonte case was the incident that sparked Padilla's interest in putting together a bill that would help districts fire such educators more expediently.