What You'll Find at The Academy Museum of Motion Pictures, Opening in 2016 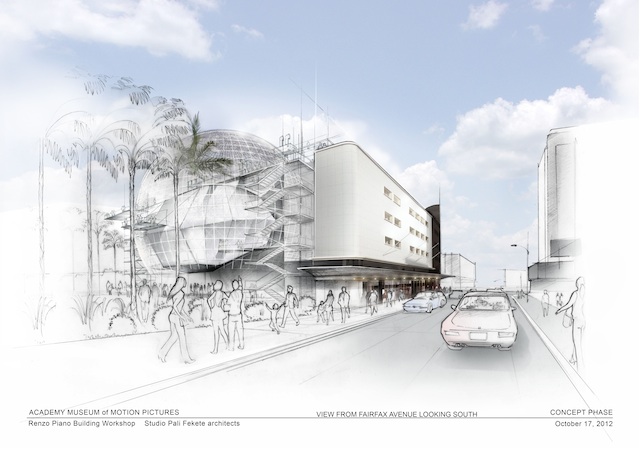 It's not expected to open until 2016, but movie lovers may want to get a little more info about what they will ultimately find at The Academy Museum of Motion Pictures, aka the Oscars Museum.

Announced last year, and years (and years and years) in the planning, the Academy Museum will be housed in the former May Company building at Wilshire and Fairfax, as adapted and designed for the Museum by architects Renzo Piano and Zoltan Pali. "A spectacular marriage of design innovation and historical preservation, the Academy Museum will explore the art, science and magic of the movies; examine their impact on culture; and inspire and delight legions of movie lovers," elaborates The Academy.

The architects will work to fully restore the iconic building's original facades, and are adding "a translucent glass-sheathed addition on the north façade of the original May Company building which will replace an extension made to the department store in 1948."

So what's going inside? Finally it will be a suitable place for the Academy to showcase items from their massive archives, which includes "140,000 films and videos, 10 million photographs, 42,000 original film posters, 80,000 annotated scripts and 10,000 production and costume design drawings, as well as equipment, props and costumes, scripts, letters and other artifacts."

It's a mighty space devoted to the art and science of movie-making:

The Academy has just announced that they've reached a major milestone in preparing to build the Museum. In a press release, the Academy celebrates their reaching their initial goal of $100 million toward a $250 million capital campaign to fund the project. That campaign was launched this year, and all the funds raised so far have been via private donation. The list of who's given is definitely a star-studded collection of Hollywood players, including campaign Chairs and their families: Annette Bening and Warren Beatty, Tom Hanks and Rita Wilson, and Bob Iger and Willow Bay, as well as several directors, producers, actors, and philanthropists.

"Hollywood has played an unparalleled role in bringing American art, culture and creativity to people around the world,” said L.A. Mayor Antonio Villaraigosa. "The Academy Museum will be a remarkable resource for L.A. that will both celebrate the industry that has defined our city and provide an essential resource that reinforces our position as leader and innovator."