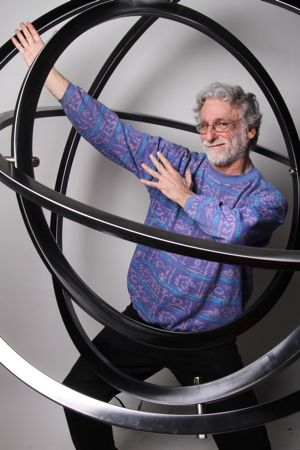 Photo courtesy of Howard Mordoh
Howard Mordoh is a man addicted to rhythm, movement and fun. At 61, he's a semi-retired medical lab worker with gray curly hair and a lifestyle most would call peculiar. A staple of Los Angeles concerts and music events—known for his inability to stop dancing once he hits the venue floor—Howard has an insatiable hunger for live music and usually attends about five concerts a week.

He's seen the Doors play "LA Woman" and David Bowie play "Ziggy Stardust" in an era our generation won't ever be lucky enough to experience. Regarded as an inspiration to a small legion of fans who've seen him dancing at concerts all over Southern California, Howard's fans say they want to be just like him when they grow up.

LAist talked to Howard about his most memorable local concert experiences, who he's looking forward to seeing in the near future and why he can't stop dancing.

What's one thing you've seen or experienced at an L.A. concert that you'll never forget?

Dancing before a Pink concert and suddenly realizing I was on the jumbo screen to thousands of cheering people...what a rush! Also seeing David Bowie do "Ziggy Stardust" at the Santa Monica Civic and seeing my first drag queen! Or The Who doing "Tommy" at Universal Amphitheater with special guests Elton John, Phil Collins, Patti Labelle, Billy Idol and Steve Winwood.

How do people usually react when they see you getting down?

First they laugh, then they get excited, then some come up and dance with me.

Did you ever think you'd get notoriety just for dancing?

How does it feel?

Who are some of your favorite L.A. bands, from any era?

How have coworkers, friends and family reacted to your free-spirited lifestyle?

Everyone seems to enjoy my energy. They want to be me when they grow up, so they tell me.

What concerts in the near future are you looking forward to?

Streisand, Mumford and Sons, Lady Gaga, Pink, Neil Young, Paul Weller, Ultraista, Other Lives, The Faint, Donovan, Django Django, The Joy Formidable and Iggy Pop/Morrissey...I could go on and on since this month is a new record for me...22 shows in 20 consecutive days!

And how does Howard do all this dancing at his age? His answer: Power naps.

Say hi to Howard if you happen to see him at your next show. And give him a shout on Facebook here.

Oh yeah, and here's video of Howard dancing it up before an LCD Sound System show: