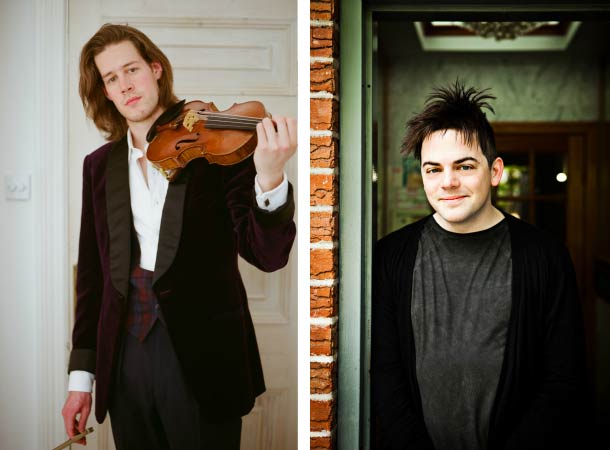 The Green Umbrella series is the LA Phil's ongoing commitment to new music, and this season's first concert features music from two very in-demand composers, Nico Muhly and Daníel Bjarnason. We got to chat with Nico Muhly and violinist Thomas Gould, who is performing Muhly's electric violin concerto, "Seeing is Believing."

LAist: How did this program with the Los Angeles Philharmonic come about? Is this your first major performance in Los Angeles?

Muhly: They asked very nicely and we said yes!  I’ve worked a few times at Disney Hall, but never with the LA Phil.  I just, in fact, last week was there playing a new piece for the Los Angeles Dance Project.

Gould: This is my first time playing in LA, and it feels good to be making my debut with a concerto written for me. Bjarnason and Nico are two of the hottest names in classical composition right now.

Not the biggest fan of the sound of electric violins and the six-string electric violin is hardly a mainstream instrument (unless you’re a Tracy Silverman fan). What can you tell us about it? What was the appeal behind it as a performer/composer?

Muhly: It’s basically a hyper violin. Tom is amazing at making it sound like a wooden instrument sometimes, and a completely electric one at other times.  There is, of course, a great concerto already for this instrument, which is John Adams’s, who is, indeed, conducting this show, which feels like quite the right combination.  I was also excited by the idea of looping segments of material live in performance, which is quite easy to do with the electric violin.

Gould: I first heard a six-string electric violin on Tracy Silverman’s recording of John Adams’s The Dharma at Big Sur, and fell in love straight away! I commissioned an instrument from Californian maker John Jordan and then began playing around with effects and looping pedals. I think it’s this versatility that I enjoy most of all - I’ve played everything from Bach to Hendrix on it.

What was the process behind composing the piece? Did you have any say or influence in how the piece was composed, or did Muhly conform to your “style”?

Gould: When I asked Nico to write me a piece in 2007 the brief was kept fairly broad. I remember that when we met initially for him to see and hear my new toys, they misbehaved pretty badly - I couldn’t work out how to stop the loop station from playing a drum beat! Thankfully I’ve found the volume knob for that now…

You both have worked with non-Classical musicians like Sigur Ros, Radiohead, and Rufus Wainwright. How has this influenced your approach in Classical music? And as a more contemporary music focused artist, what do you find attracts a new audience, and what keeps them coming back?

Muhly: I’ve found that Good Quality Work works across the board.  Audiences seem to react to good music, and not being condescended to or pandered to!  Make the best music you possibly can, and I think people will find it.

Gould: Those guys have an amazing on-stage charisma and ability to make each member of the audience feel they’re singing just for them. It’s harder to achieve that in classical music when you have to keep your eye on the sheet music, conductor and other musicians on stage, but it’s definitely something we should aspire to. Maintaining a relationship with your audience off-stage is just as important, and it’s so easy nowadays with Twitter and Facebook.

With extensive work in both the US and the UK, do either of you see any differences between the contemporary music scenes here and there? Or with musicians and composers in general?

Muhly: I shudder to even begin to answer this question!  But as somebody who’s worked almost equally in London and New York, there is a wonderful sense of a community that extends through both cities.  I’d perhaps posit that London has always been a few years ahead of New York specifically in terms of awesome young ensembles — from the Sinfonietta to Aurora — but we always catch up!

Gould: Both the US and UK have really vibrant contemporary music scenes. It’s a difficult time to be a composer though - there are so many good ones and so few opportunities for their work to be performed or recorded

For those of us that hit traffic and miss the pre-concert lectures, is there anything we should listen to before the concert, or anything we might want to focus our attention on during the performance?

Muhly: I am obsessed with educational videos and NOVA and all that great 80’s public TV. Seeing is Believing takes its cues from these videos, with a sort of amplified sense of wonder. I’m also so happy to share the program with Daníel Bjarnason, who is the most extraordinary composer from Iceland and a good friend; his music is hyper-colorful, shimmering, and brilliant. I’m excited that my old piece (from 2007, I think it is?) is going to find new company with Daníel’s kinetic cello concerto and his new piece!

Gould: The opening and closing sections are meant to be reminiscent of a 1980s educational film about space exploration. The cadenza-like sections where I use the looping pedals to layer up multiple lines are particularly evocative. Watch my feet for some fancy footwork!

Any plans for your time in Los Angeles?

Muhly: I am going to direct myself towards sushi and eat all of it.  LA has the best sushi, it makes me crazy.  I'm going to visit friends and if I have an hour free I am driving to Santa Monica and walking on the beach.

Gould: I've brought my mum with me for the trip, so she'll probably try to drag me round some shopping malls and markets! I'd love to visit Universal Studios again - I went as a kid and it was unforgettable!

You can see the piece "Seeing is Believing" tomorrow night at the Disney Hall at 8 PM.