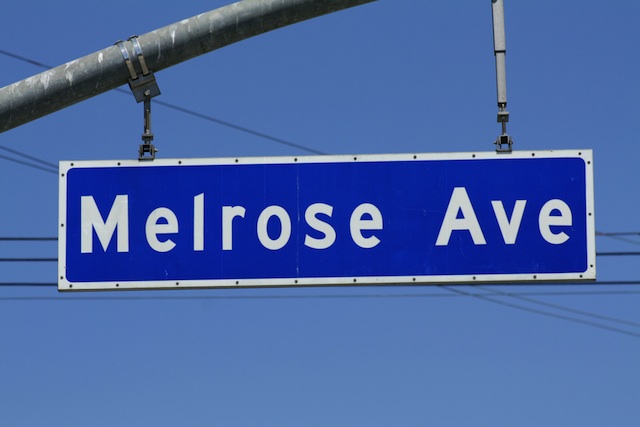 Start doing your stretches, and summon your stamina: The Great L.A. Walk's 2012 route and date have been declared, and this year it's all about "Melrose and More."

On Saturday November 17, Angelenos are invited to take an approximately 17-mile walk from one side of the city to the other. The starting point is the Walt Disney Concert Hall, and the end is the Pacific Ocean. The walk will take you through Downtown, Echo Park, East Hollywood, West Hollywood, Beverly Hills, Westwood and Santa Monica, traveling from Temple to Virgil to Melrose to Santa Monica.

But the centerpiece of the GLAW this year is Melrose, which organizers say "gave L.A. its punk and new wave cred in the 1980s and early 90s." Plus:

Not only is there the famed Melrose District shops and restaurants, but Melrose is home to Paramount Studios (celebrating its 100th anniversary this year); in East Hollywood is the hub of L.A.'s bike culture; and an epicenter of design and fashion (thanks in part to the mammoth Pacific Design Center).

Melrose Avenue is six miles end to end, in case you are thinking of just taking on a portion of the big walk.

The GLAW is organized by Mike and Maria of the blog Franklin Avenue. Previous walks have taken on Wilshire Boulevard, Santa Monica and Sunset Boulevards, West Adams, and Hollywood.

It's absolutely free for you to participate, and walkers make their own pace, and stop when they want for food, photos, breaks, and so on. You can RSVP on the event's Facebook page.

It's been a couple of years since we did the Great L.A. Walk (we did the Wilshire Blvd. revisited walk in 2010) so maybe we'll see you on Melrose!