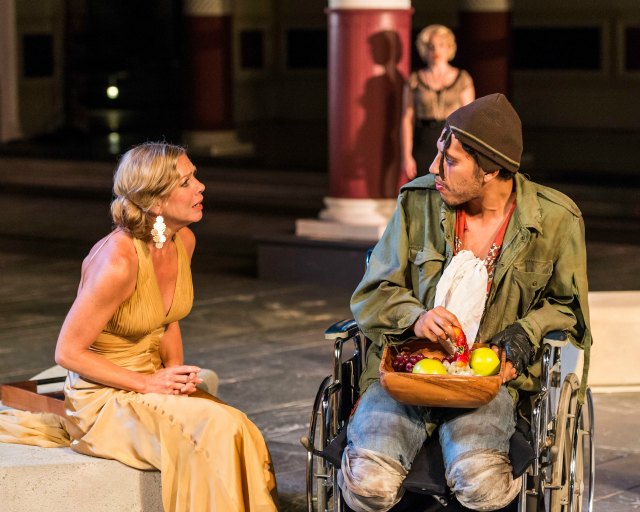 Helen, Euripides's dark and somber exploration of the consequences of war from the perspective of a captive Helen of Troy is a beautifully moving, classical anti-war play. Unfortunately, our own Los Angeles Playwrights' Arena put this 2,424 year old play through a disappointing, home-grown WTF ringer at the Getty Villa.

Patrons of this production of Helen can expect to see excellent performances, a gorgeous set, fancy staging, great singing, and careful direction...all encapsulated in a cloister of insulting post-ironic stereotypes, subtly prejudice messages, tacky attempts at humor, and a barrage of cliches! Playwrights' Arena had their hearts in the right place with this production — it is obviously that what they really tried to do was create a Helen that was relevant and interesting to contemporary Angeleno audiences. But the show just does not fulfill that vision. You know that suffocating, mindless feeling you get when you are trapped in the slow-moving crowd of otherwise absorbed tourists, excessive pop culture, landscape pollution, and costumed characters at Hollywood and Highland? Yeah, that is exactly what it feel like to watch this rendering of Helen.

This reviewer heartily respects every minute of hard work that goes into creating a theatrical production and honors the long-honed talents that work to create a show, but at the same time, the messages that art sends are important, too. The Playwrights' Arena version of Helen depicts the work's thin, gorgeous, blonde, white, heroine and hero as decadently saintly and honorable; while at the same time using non-white characters to portray drug addicts, not-so-smart groveling servants, and all out evil-doers. The production actually has an enslaved African-American mammy archetype. Racist depictions and stereotypes should be resoundingly unacceptable in Los Angeles in this day and age. As a whole, Angelenos are better than that; our local artists deserve better scripts than that; and the Getty, as an institution that makes art available freely to anyone regardless of ability to pay, should be beyond such programming.

Playwright Nick Salamone adapted Euripides' Helen for this run at the Getty Villa. Salamone clearly wanted to give this ancient Greek play relevancy for modern-day audiences, and even more specifically to make it resonate specifically to the local set by weaving in imagery and plot twists that revolve around the Hollywood film industry's golden era. Helen of Troy is portrayed as a stunning A-list starlet. Her muses are not the traditional Greek muses, but instead are Marilyn Monroe, Elizabeth Taylor, and Vivien Leigh. Helen's protective maid is an incarnation of Hattie McDaniel. 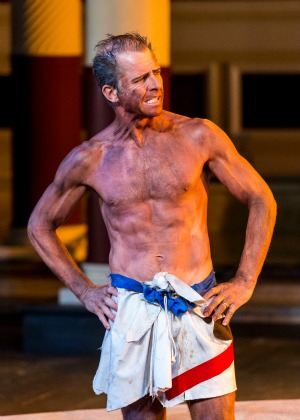 Euripides’ Helen at the Getty VillaMaxwell Caulfield (Menelaos) Photo: © 2012 Craig Schwartz
Salamone's script turns a Greek tragedy into a corny comedy that is rife with the sort of cheesy, borrowed from popular culture cliches that you would find in a Disney-Pixar movie. This is just so off-putting and artistically lazy on so many levels, notwithstanding the fact that he greatly underestimates the range of his audience. The play's original themes of love, loss, memory, mourning, war, and homesickness indeed do with people regardless of the time and place they exist in. Salamone must have wrongly thought otherwise or perhaps thought that his audience just isn't clever or sentient enough to understand deep emotion.

The fault for this failed attempt at theatre lies not only with with the writer, but with the director, Jon Lawrence Rivera. His work is generally nothing short of perfect as he makes expansive use of the stage. The same is true for his direction of Helen. But creating awesome blocking is not the only job of the director. The director must also be an advocate for the audience that give paying patrons something that is worthy of their minds, money, and time. Bastardized prejudice theatrical fluff like Helen just doesn't cut it. How the script passed muster with the Getty and with producers is beyond comprehension. It is one thing to produce a play with a cliche corny jokes. That is forgivable. But to present something with embarrassing prejudice stereotypes is just so inappropriate and definitely not entertaining.

There are a few good things about Helen at the Getty: The entire cast (Rachel Sorsa, Melody Butiu, Arsene DeLay, Jayme Lake, Maxwell Caulfield, Carlease Burke, Robert Almodovar, Chil Kong, Christopher Rivas, and Natsuko Ohama) is immensely and undeniable talented and flawless. Rivera's direction is fluid and full of broad, exciting stokes of movement. The staging elements by John H. Binkley (set design) and R. CHristopher Stokes Iight design) are simple and organic with some interesting multi-media effects by Adam Flemming. And, of course, you can't beat the cool, starry tranquility and eucalyptus scented air of the Getty Villa's outdoor theatre. But sadly, all of these wonderful talents are wasted on this rendering of Helen.

Helen is playing at the Getty Villa through September 29. Tickets are $38 to $42 dollars with onsite parking available for $10. Ticketing and additional information is available online.