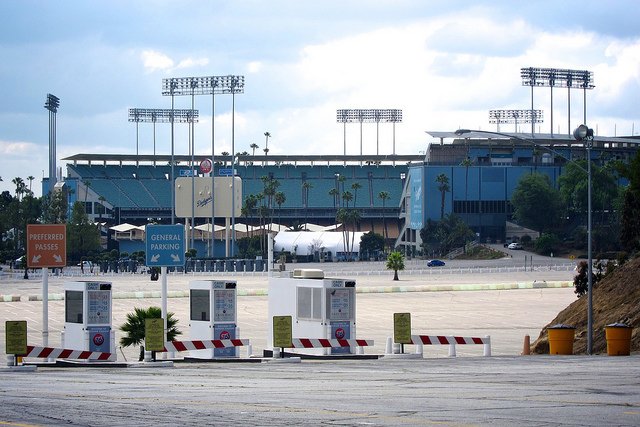 Fans of L.A.'s Big Blue, your team's Chavez Ravine digs are destined for a new look. The Los Angeles Dodgers have selected Ashton Design to do a renovation of the historic baseball stadium.

The Baltimore-based firm made the announcement themselves on their site blog, revealing two members of "team Ashton," Jonathan Han and Ronnie Younts, have already been doing some preliminary walk-throughs of the venue.

The Dodgers hired Janet Marie Smith specifically to oversee the project; she came on board in August, and has worked with Ashton Design previously on renovation projects in Camden Yards (Baltimore), Fenway Park (Boston), and Turner Field (Atlanta). Ashton Design has some experience on the West Coast, since they've previously done work for Pasadena's famous Rose Bowl.

Dodgers Stadium, a mid-century modern stadium, offers a new set of challenges and a unique history that our designers are very excited to tackle! The renovation will be a multi-year project and fans can expect a more engaging and enjoyable experience in the future.

So are drastic changes expected for the stadium? Nah. In August, Dodgers President Stan Kasten said of Smith's vision:

But there will be improvements: Kids' areas, more bars and restaurants, relaxation areas, history displays, interactive areas — the kinds of things you find in modern ballparks," added Kasten.

Work is likely to get underway in the winter.