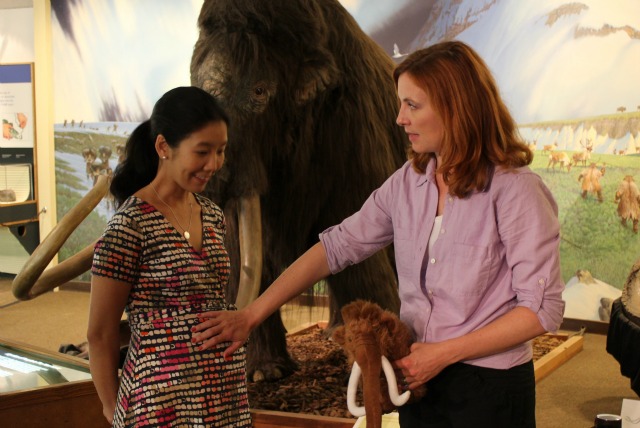 The site-specific theatre company Chalk Rep is in the midst of their exhilarating, fast-paced short theater festival, appropriately called Flash Festival. This year's science-themed Flash Festival takes place at the iconic La Brea Tar Pits and Page Museum. Nearly one hundred people including actors, directors, producers, playwrights and paleontologists came together to create 15 one-act, no-budget plays about paleontology, science, natural history and the tangled-up personal relationships that persists amid the methodical study of our physical world.

LAist spoke with site-specific theatre veterans Jennifer Chang and Joe Luis Cedillo, two of the individuals involved with Flash Festival. Chang is a Chalk Rep Co-Artistic Director and founding member. She is also performing and directing for Flash Festival. Cedillo is a playwright, director, and Artistic Director of local theatre company, Company of Strangers. His play The Party opened this year's Flash Fest.

LAist: What drew you to the Page Museum and the Tar Pits as a performance space?
Chang: It is such an iconic Los Angeles landmark and it has a whole lot of history. We have this very, very old tar pit in the middle of Los Angeles! They have millions of bones in their collection and it is just incredible that they are still digging, still cataloging. There are racks upon racks upon racks of bones stored underground in vaults. What you see in the museum is just a tiny minuscule fraction of what they have collected. It is just this big ongoing project that continues no matter how L.A. change. It is amazing! It definitely has a time capsule quality to it.

Cedillo: I have been going to the La Brea Tar Pits since I was a kid, so getting involved as a writer was really fulfilling. When I was growing up, the Tar Pits were where I was first introduced to science. I remember realizing that the mom mastodon out on the tar lake was separated from the rest of the mastodons. At four years old, that basically became my first childhood nightmare—you know, being separated from my own mom like the baby mastodon. Now, it is really interesting to see all of the history there, not just all the bones and stuff, but also just how the Page Museum came to be. It is a one-of-a-kind place. It is one of its kind in the world. It says something about us. It is like a barometer but a timeless one. It doesn't exist in a political way, but you meaure yourself against it, you cant help it. You look at the ancient animal bones and the mastodons and everything that was here years and years ago, and you are instantly connected to the past. It makes you conscious of an awareness of time that exists in a way that flirts with divinity.

What can the audience expect to encounter at the Tar Pits Flash Festival?Chang: The audience will be surprised! It is really enjoyable and fun. We really tried to meld science and art together. We made an agreement with the museum that every playwright had to utilize science in some way, so the audience can expect to learn a little bit about science from each play in both subtle and not-so-subtle ways. The audience will get to be mobile throughout the museum, and there are a variety of experiences.

I have had the privilege of reading through all of the plays and surprisingly the museum has also inspired a lot of relationship themes. Some explore the parent-child relationship, some explore lovers, and there are a lot of specific human issues. It is interesting that a museum full of old bones could inspire that.

Cedillo:This event at the Page Museum is definitely going to let the audience see the space anew. As the audience takes in the plays, they will get to vibe off of the space, take in the visuals in a different way, and become informed about the museum in a new way. The audience will get to experience a really unique synthesis that you do not get from a constructed set or from watching a movie.

How did you select plays for the festival?
Chang: There was no play selection. We selected playwrights. It is a way for Chalk Rep to get to know playwrights that we have not worked with before and explore that relationship. We invite writers that have come to our attention that we have an interest in developing theater with. The Page Museum gave us three weekends to work with. We invited 15 playwrights and assigned each one to a section of the museum. Each writer got to write a ten minute play inspired by their assigned location, which lets the audience see five different plays during a single trip to Flash Festival. The whole process is very truncated. The writers have a month to write their plays, and then the performers have about a week to prepare.

Joe, what your play, The Party, about?
Cedillo: The tar pits are basically just layers upon layer of bones that the paleontologists have to put together like a puzzle. I drew inspiration from these layers and created a play that is about class stratification. The Party is based on a real experience I had downtown during July's Art Walk when the protesters got busted by the police for chalking.

I was participating in an event at LATC when the police came to the doors of the theatre and told us that we could not leave. We got stuck in there. At first there was chaos. Everyone was confused and afraid and wanted to go home. So I put on music and we busted out the wine again. Then everyone started to dance and the chaos turned into a party atmosphere where people were having conversations about what was happening with Occupy. It was interesting to see generationally what people were saying. Some people said things like "Back in our country, the police identify protesters early and make them disappear" or "In my country they don't shoot you with rubber bullets, they use real bullets."

Plot-wise, my play depicts a bunch of people that are stuck inside of a museum because a big Occupy protest is happening outside. It is a study of class stratification and looks at how different generations are processing the Occupy Movement. When you are a writer, every character is a shade of yourself and my own personal frustration is filtered through the characters of this play. It makes me wonder which side I am on. I mean which side am I really on? What is Occupy really trying to say to me? 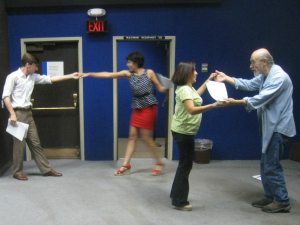 The cast of 'The Party' rehearsing for Chalk Rep's Flash Festival at the Page Museum (photo courtesy of Joe Luis Cedillo).

How involved was the Page Museum staff in creating the Flash Festival plays?Chang: The Page Museum has been really great about just letting us do our thing. It has been a really easy collaboration. They hosted our initial introduction to the museum. We talked to them about how science would to be integrated into the plays and also discussed correcting very common misinformation that people have about the specimens.

Chang: Yes, like Saber-tooth Cat! There is no such thing as a saber-tooth tiger! The correct term is saber-tooth cat. Also there are no dinosaurs at the museum. The Page Museum wanted to make sure that the playwrights had their facts straight. And they did correct those in the drafts that we submitted to the museum.

Cedillo: We were informed that the Page Museum's pet peeve is bad science. It was really cool to have a real paleontologist work as my dramaturg. We got the chance to actually meet paleontologists and hang out with them. They took us around the museum and we asked them a shit-ton of questions. The scientists were really cool and broke all of the information down for us. And that helped us all to get better. It was really eye-opening and helpful. Saber-tooth cat made it into my play! It is the kind of fact that really stuck out.

What do you love the most about creating site-specific theatre?
Chang: I think that it feels alive and four dimensional in a way. Wherever you are has a history of its own and its own story to tell. I really love that. What is awesome about site-specific theatre is that you are relating to things with that have real meaning and history, not just a temporary thing that we built just for a show. The items in the space have a real history of their own. The same thing is true for the Page Museum which has been around since the 70s. And the specimens are tens of thousands of years old depending on the era.

Cedillo: Site-specific theatre lets you tinker with an experiential model where you can really vibe off of the environment, experiment with aesthetics, and play with the sonic quality of the space. A site-specific show is less about material stuff and more about sharing whatever the actor is going through and seeing a space anew. One of the things that I like about site-specific theatre is that you don't get stuck in the stage mechanics. When you take away the constraints of a physical theatre, you become so much more free. Sometimes, you have to actually find ways to restrict yourself again because site specific theatre is almost too free!

How is doing site-specific theatre different from doing traditional theatre?
Chang: Site-specific theatre requires very little set up. Site-specific theatre is special. It is different from going to a movie. There are people in the room with you, emoting, trying to tell a story by removing the fourth wall and any space between the actors and audience. It really brings a spotlight to the special actor-audience relationship. As an actor, doing site-specific theatre forces you to concentrate in a whole new way. You don't have the bright lights of the stage to sort of block out who is in the audience. You are very aware of who is watching you. Oftentimes you end up with blocking that is within inches of somebody and sometimes the audience surprises you by stepping even more into your playing area. It can really feel like you are walking a tight rope where you have to roll with the punches. I mean there is just such much more room for play between the audience and actors that it is a whole new perspective. I would say that it is a special skill is not every actor's cup of tea.

Why is it important to do site-specific theatre?
Chang: The cool about site-specific theatre is that people who don't normally go to theatre and people that do go to tradition theatre both have a common reaction. They say "Wow! This is so cool! I have never been to anything like this before! Why don't people do more plays like this because I would go more often!" Site-specific theatre doesn't make you want to fall asleep. The audience has a certain responsibility to be present as well, which is really awesome.

Cedillo: I agree. Site-specific makes theatre an event again. It is very different from going to a movie and deals with a much different cultural capital. It opens the theatre up from a closed audience to a much more public audience. For example, with Flash Fest, people are saying "Oh! The Page Museum is doing that, well, I should go to that just because I like the Page Museum." You get that audience cross over and it lets people see a familiar space anew. I would add that it is also good for the craft of theatre.

So last question. So, seriously, there really is no such thing as a Saber-tooth Tiger?!
Chang and Cedillo: NOOOOO!!!

Chalk Rep's Flash Festival is running at the Page Museum at the La Brea Tar Pits through September 23. Tickets are $15. Reservations are available online.