One Woman's Terrifying Tale Of Harassment On Metro 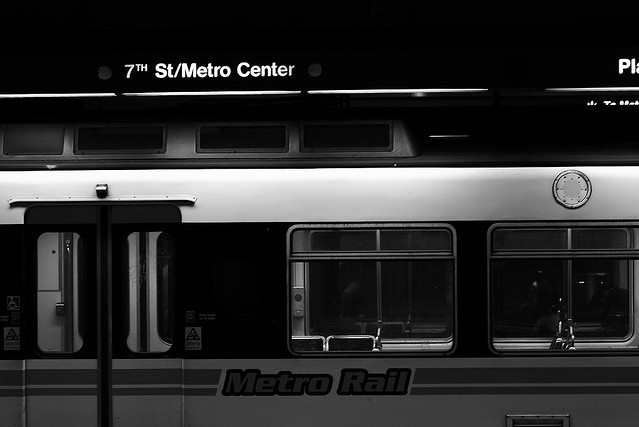 (Related: Women Share Their Stories Of Sexual Harassment (And Worse) On Public Transportation)

An anonymous guest blogger for Jezebel details the day-in, day-out harassment she receives from men on the Blue and Red Metro lines:


I often ride the Metro when I commute from North Hollywood to Long Beach in order to save money. I bring a book, pointedly wear a ring on my ring finger to imply I'm married (I'm not) and keep to myself.

Without fail, I am aggressively approached by men on at least half of these commutes. The most common approach is to walk up to where I am sitting with body language that practically screams LEAVE ME ALONE and sit down next to me or as close to me as possible, when the train is not crowded and there are many empty rows. Sometimes an overly friendly arm is draped over the railing behind me, or they attempt to lean in close to talk to me as if we are old friends.

One day on the Blue Line this kind of harassment explodes into something much scarier when she asks a man to not bother her while she reads:


The seemingly annoying but normal man a moment before is now talking to himself, becoming agitated. In my years of being bothered by total strangers, I have learned how to hold a book and seem to be reading while taking in everything around me. He is glaring at me, and says out loud in an angry baby talk voice "PLEASELEAVEMEALONEI'MREADING. PLEASE LEAVE ME ALOOOONE."

Then he's up out of his seat and things go from bad to worse. He begins pacing back and forth in front of his bike, alternating between screaming something about his mother being dead and calling me a slut, a hoe, a bitch. I am frozen in place.

Eventually, she says this man starts punching the walls and doors of the train as he screams at her for two more stops using lines like: "IF I HAD A GUN I'D SHOOT YOU I WOULD FUCKING KILL YOU BITCH." Fortunately, the woman makes it off the line okay onto her next connection. But this is the kind of awful experience that doesn't necessarily make it into crime reports (the author doesn't mention reporting this incident to police, so we don't know for sure if she did in this case).

UCLA's Anastasia Loukaitou-Sideris authored a study in 2010 about women's sense of safety (or lack thereof) when taking public transportation around the world because of course this issue isn't limited to Los Angeles, and she spoke with Planetizen about her work. She did mention that this lower-level crime like harassment doesn't end up being reported:


Women are quite intimidated to report these kinds of crimes, it is difficult to report, and there is a perception that there is not much that the police can do. And these types of crimes really intimidate women transit riders, and lead them to avoid certain transit modes or use them only during specific times of the day or only when they are accompanied. If you only look at the hard data, you don’t see that.

Loukaitou-Sideris found that making women feel safe wasn't a priority at many major transportation agencies in the U.S. Her solution? First of all, making sure women were included in the planning process of transportation systems, since they're often not. She also suggests taking into consideration the safety of stop locations, adding a call button for emergencies and adding next train or bus signs so women know how long they have to wait at a particular stop.

UPDATE: This woman's story hit a nerve—so much so that we're considering doing a follow-up post. Some of you have already shared your own similar stories with us, but if you haven't yet and you'd like to, put them in the comments or e-mail us at tips@laist.com. Put the word "harassment" in the subject line, and let us know how you would like us to identify you.