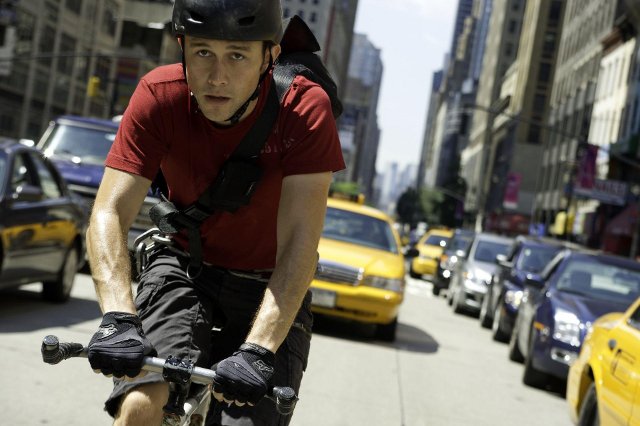 Spike Lee is one of filmdom's proudest New Yorkers, but in the past few years he's ventured far from home: New Orleans, for Hurricane Katrina docs When the Levees Broke and If God Is Willing and Da Creek Don't Rise, to WWII-era Italy for Miracle at St. Anna and even to the Staples Center for Kobe Doin' Work. This weekend, Lee's back in Brooklyn for Red Hook Summer. Appropriately, the story is about returning to your roots—a 13-year old boy goes to stay with his grandfather, a preacher in the projects, and grows up the hard way. The trailer boasts warm tones, film fuzz and high top fades—save for a scene where the kid's desperately FaceTiming his mom, you'd think it was a period piece. Red Hook Summer opens at ArcLight Hollywood (where Spike leads a Q&A at tomorrow's 7:45 show) and select Laemmle locations.

Stay in the Big Apple, but go go go for a Premium Rush. Joey Gordon-Levitt stars as a bike messenger whose client wants his envelope back—and is willing to kill for it. But once Chinese mobsters and a cadre of police join the pursuit, one bloodthirsty driver may be the least of his problems. For a more comedic take on criminal car pursuit, Hit and Run has Dax Shepard (Idiocracy) as former getaway driver Charlie Bronson (hmmm...) who takes his lady Kristen Bell (Forgetting Sarah Marshall) on the road, pedal firmly on metal. A dreaded former accomplice (Bradley Cooper, The Hangover) has Dax's number and wants Dax's many millions of numbers in return. Tom Arnold supports as a dumbfounded DEA agent.

Lastly, we have two horror stories on hand. The Apparition sticks squarely to the teen market with alumni from Gossip Girl, Harry Potter and Twilight. The ghost story may be satisfied with a startle, but Compliance aims to deeply disturb. The indie drama follows a fast food manager who receives a call from a cop that one of her employees has stolen money and she'll have to strip-search her to find it. Only this "cop" is a perv prankster on a payphone. How far will she go to satisfy this sadistic "authority"? Pat Healy (The Innkeepers, Magnolia) plays the "officer", while Ann Dowd (Garden State, Apt Pupil) oversees Dreama Walker (Gran Torino). The film opens exclusively at the Nuart.