WeHo's Rainbow Crosswalks Will Be Made Permanent 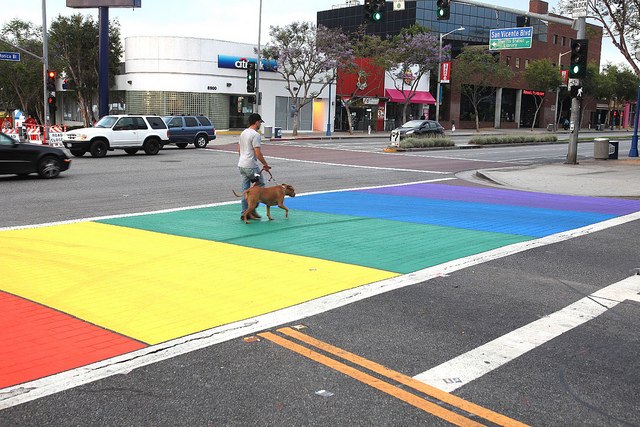 Originally approved and installed temporarily in honor of Gay Pride month in June, the rainbow crosswalks at Santa Monica and San Vicente Boulevards in West Hollywood are going to be made permanent.

Thanks to their popularity and symbolism, the West Hollywood City Council voted Monday night to keep the crosswalks in all their rainbow-painted glory, according to Patch.

The streets will need a paint-over, since they were done with just a limited shelf-life in mind and have become faded and scuffed:

With the decision to make the rainbow crosswalks permanent, the city will have the crosswalks regraded and apply thermoplastic pavement markings like is used in other crosswalks. That thermoplastic marking will be slip and slide resistant, is less likely to fade and cleans easily.

Local leaders agree, though, that the crosswalks are good for the city, especially because it is a destination for LGBT visitors:

“[The crosswalks] are critical to the tourists and young gay and lesbian people and not-so-young gay and lesbian people who are passing through from Iowa or Montana or Kansas,” [City Councilman John] Duran said. “They cannot believe that they actually see a municipality where the rainbow colors are on display all year long. It tells them it is a sanctuary. It tells them there is a safe place in America where the LGBT community is celebrated.”