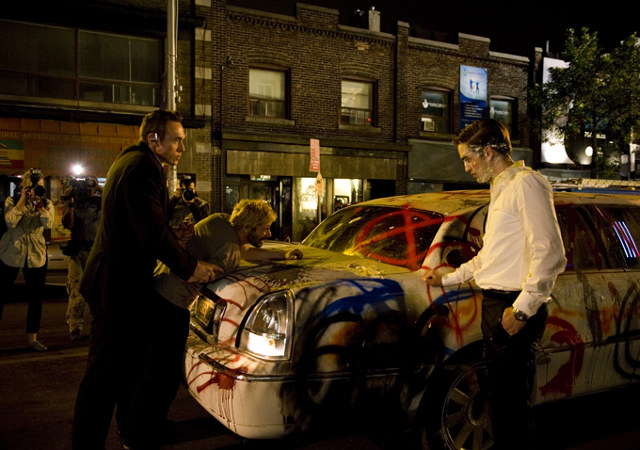 It's a monster weekend for new releases, appropriately led off by ParaNorman. The stop-motion family adventure flick scares up the story of social outcast Norman, whose ability to see dead people comes in handy when ghosts threaten his town. Kodi Smit-McPhee (Norman's voice actor) is no slouch when it comes to the spooky, having squared off against a vampire in Let Me In. Other talent include Anna Kendrick (Scott Pilgrim vs. The World), Casey Affleck (Ocean's Eleven through Thirteen), Christopher Mintz-Plasse (Superbad), Leslie Mann (Rio), Jeff Garlin & John Goodman.

Get more ghosts with The Awakening in limited release. The British period thriller stars Rebecca Hall (The Town) as the requisite skeptic who encounters the truly supernatural at a boarding school headed by Dominic West (The Wire). The story may not be original, but the 1920s ghost-hunting looks like a lively twist. The Awakening lurks in the darkness at select AMC & Laemmle locations.

Living or dead, few Brits look as consistently ghostly as Robert Pattinson. We mean this as a compliment, particularly as it relates to his role as Eric Packer in Cosmopolis. While few Angelenos would risk fighting traffic to see a filmed account of someone else stuck in traffic, Packer's existential road rage inhabits a tricked-out limo with hookers, doctors & billion-dollar bets on the inside, with violent protests against an uncaring capitalism on the outside. While director David Cronenberg is primarily known for the visceral body horror of earlier works like The Fly & Videodrome, he has also proven to be adept at identity loss through psychic fracture in A History of Violence & Eastern Promises. While Cosmopolis is his first film in years without Viggo Mortensen, it does feature Juliette Binoche, Jay Baruchel & Paul Giamatti in addition to R-Pattz. Cosmopolis opens exclusively at The Landmark.

Those protesting outside Packer's limo may have been the filmmakers behind Heist: Who Stole The American Dream? The real-life horror story is one of a number of politically charged documentaries hitting screens this weekend, running the spectrum from Christian conservative Dinesh D'Souza's 2016: Obama's America to You've Been Trumped, detailing the struggle of a group of Scottish homeowners-cum-environmentalists as The Donald, the Scottish government & local police all attempt to steam-roll them out of their homes so the real estate tycoon can build a golf course. There's even that rarity of rarities, a positive political documentary, It Is No Dream: The Life of Theodore Herzl. With narration from Ben Kingsley & Christoph Waltz, the film uses rare archival footage to illustrate Herzl's evolution from advocating mass Jewish conversion to Christianity to founding the Zionist movement that would lead to the establishment of the state of Israel. It is No Dream comes true at several Laemmle locations, with crew panels scheduled all weekend.

Believe it or not, there's still more (we didn't even mention the continuation of DocuWeeks, or expand on The Expendables!). Full list appears below. See you at the movies!