Are Freeway Signs Becoming a Lesson in "College Promotion 101"? 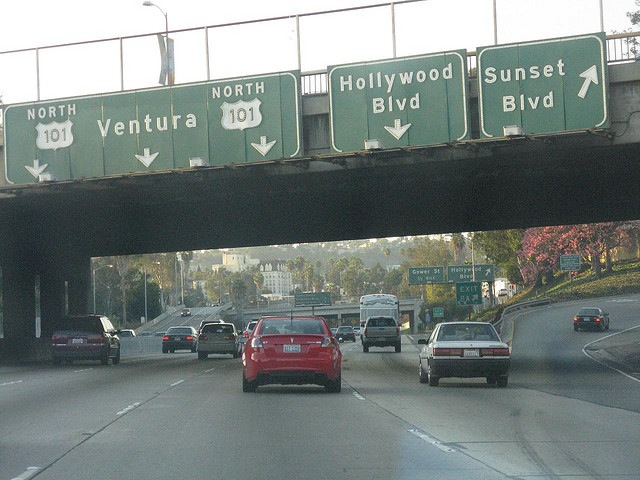 Beneath the freeway-lining billboards for gentlemen's clubs and vodka are a much more subtle kind of advertising: freeway signs. And they seem to be a particular favorite of small colleges.

A recent Los Angeles Times article looks in particular at the hoard of freeway signage promoting lesser-known or for-profit colleges and vocational schools — which include jewels like the Hypnosis Motivation Institute — along the US 101 in the west San Fernando Valley. Journalist Bob Pool notes that an especially sign-dense 7-mile stretch of the Ventura Freeway might belong in a college catalog under "College Promotion 101."

While not an especially glamorous way of reaching potential students, applying for a freeway sign from CalTrans seems right up there with the glossy brochures in terms of creating an image for colleges.

"There's a sense of pride in having a freeway sign," said Alan L. Gansberg, dean of Tarzana's Columbia College Hollywood. "It legitimizes you."

So who exactly is allowed to apply for a big fancy metal sign?

To qualify, campuses generally must have at least 1,000 full- or part-time students, said Maria Raptis, a spokeswoman for the California Department of Transportation. Schools pay a $7,500 fee to cover the 13-foot-by-51/2-foot signs' manufacture and installation. Caltrans pays for ongoing maintenance.

Some might be sore at the idea of their tax dollars going to maintaining signs for a hypnotherapy school, while others detect a possibly foul irony at play.

In one of a series of rants posted in the comments section of the Times article, commenter mjolles wrote:

"This is pretty cheap advertising, considering most of these private colleges are owned by corporations listed on [Wall Street], that make their money exploiting the financial age programs by suckering students into a lifetime of debt. Scamtrans has found another creative way to finance their jobs while the State of California goes under.

Let's give McDonald's a sign for Hamburger College and H&R Block one for their tax preparation classes."

What do you think: Are these signs really a big deal? Or are people not making a big enough fuss?