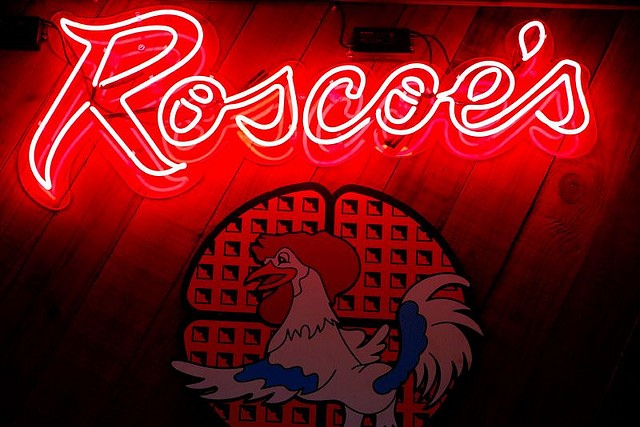 Photo by Melissa Acedera via the LAist Featured Photos pool

It has finally happened: L.A. no longer has a monopoly on its beloved Roscoe's House of Chicken 'n Waffles.

The O.C. Register's Fast Food Maven blog reported that the world famous and L.A.-venerated Roscoe's will be flying south to Orange County, with a new location opening up in three months or so.

The new restaurant will be located only a half-mile away from Disneyland in Anaheim, taking up a 5,000-square-foot space and making this location the chain's largest yet (it currently has restaurants in Long Beach, Hollywood, Pasadena, West Los Angeles and Los Angeles). Fast Food Maven's Nancy Luna found out from Roscoe's construction manager, Mohammad Jalilian, that the new restaurant will hopefully have "an outdoor street-level patio, as well as a second-story French Colonial veranda."

As if that weren't news enough, Roscoe's may well be moving even more southward—Jalilian says the restaurant is scouting San Diego sites as well.

The news has yet to reach explosion status on Twitter, but the rumblings of something big are detectable.

Hide yo kids, hide yo wife- Roscoe's Chicken and Waffles is coming to Orange County! fastfood.ocregister.com/2012/07/25/ros…

For some, the news will be met with territorial ire ("How could Roscoe's betray Los Angeles?!"); for others, particularly O.C. frequenters or residents, this means a considerably shorter commute for those ridiculously sublime waffles with gooey syrup and perfectly crunchy fried chicken.

What do you think? Is Roscoe's selling out? Or just spreading the love?