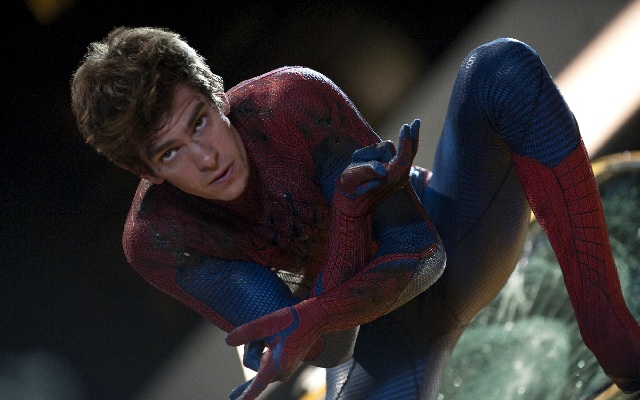 It's customary for studios to release films on a Wednesday during summer holidays to maximize box-office earnings. Since the 4th of July fell on a Wednesday this year, Sony opened superhero tentpole The Amazing Spiderman even earlier, with some theaters even screening it Monday at midnight. According to Box Office Mojo, the web-slinger's used the extra time to net nearly $60M.

If you haven't seen Spidey yet, here's the scoop. Andrew Garfield takes over for Tobey Maguire as the titular hero & his high school alter-ego Peter Parker. Director Marc Webb ((500) Days of Summer) takes it back to the beginning - but this time it's a little different. Peter's trying to unravel what happened to his missing parents, and it sticks him in a whole web of trouble, from anti-vigilante police captain George Stacy (Denis Leary), the mysterious OsCorp. & the monstrous Lizard (Rhys Ifans, previously of Peter Pan prequel Neverland). Classmate cum crush Gwen Stacy (Emma Stone) proves to be Peter's only ally in this darker take on the classic character.

Should you desire an unfriendly neighborhood slinger, move close to the border & even closer to the edge with Savages. Here, the swinging comes from a menage-a-trois relationship between two marijuana growers (Kick-Ass' Aaron Johnson & Taylor Kitsch, who's looking to turn 2012 around after headlining its most famous flops) and their muse Ophelia (Gossip Girl's Blake Lively). The masked man is no hero, but Lado (Benicio del Toro), a murderous enforcer for cartel queenpin Elena (Salma Hayek). Oliver Stone (Born on the Fourth of July) directs from a screenplay written by himself, Shane Salerno (the 2010 Hawaii Five-O) & Don Winslow (adapting his novel of the same name).

In limited release, counter-programming comes courtesy of bittersweet romance Take This Waltz, starring Michelle Williams & Luke Kirby (Mambo Italiano) as neighbors who fall for each other despite her happy marriage to Seth Rogen. Canadian actress Sarah Polley (Go!) directs from her own original script. The film plays in West LA at The Landmark & Laemmle locales in Pasadena & Encino.

More sentimental romantics should seek out The Magic of Belle Isle, the latest from director Rob Reiner (When Harry Met Sally). The downhome romance stars Morgan Freeman as a fallen Western writer who finds a new life with Virginia Madsen (Sideways) as he helps care for her kids. The film opens at the Laemmles in Beverly Hills & Encino. If you can't make it out, it's also available on VOD.

Full list appears below. For festivals, revival screenings & midnight movies, be sure to check out The Amazing Film Calendar, man!