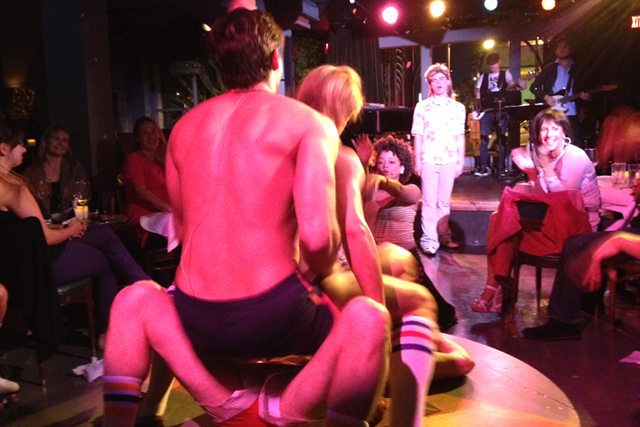 The Cast of 'For The Record: Boogie Nights'" (Photo by Nick Wilson/LAist)

"I like simple pleasures, like butter in my ass, lollipops in my mouth. That's just me. That's just something that I enjoy." If you are like Floyd Gondolli in Paul Thomas Anderson's 1997 masterpiece Boogie Nights and looking for simple pleasures, look no farther than "For The Record: Boogie Nights." Singing, dancing, cocktails, and a whole lot of sex appeal - Los Feliz's best date spot just got a whole lot edgier.

For the Record consistently presents high-quality performances at a fraction of the cost you'd normally have to pay to see these Broadway and off-Broadway actors. After staging cabaret-meets-musical hits based on the films of Baz Lurhmann, the Coen Brothers, John Hughes, and Quentin Tarantino, For the Record bravely tackles the dark and raunchy films of Paul Thomas Anderson. And let's be clear: they don't pull any punches.

The first half of the show features music from Magnolia, Punch Drunk Love, and thankfully inserts some necessary comedic relief with a rendition of There Will Be Blood's baptismal scene. By bringing Aimee Mann's beautiful songs front and center, casual Magnolia fans will bow to the genius of PTA once they realize that her lyrics tell the entire, sad story.

After speciality cocktails like "Punch Drunk Punch" send your cranium spinning, it's time to let go of your remaining inhibitions because the second half of the show is a rollicking, sex-fueled musical interpretation of Boogie Nights. It's at times playful with songs like "Jessie's Girl" and "Afternoon Delight," but also isn't afraid to explore the film's darker themes.

What doesn't vary is the quality of the performances. I still can't believe how deftly the charming Jackie Seiden skated her way around the newly-expanded Rockwell room as Rollergirl. Director Shane Scheel struck gold when he cast dancer Derek Ferguson in his first acting role as the show's star, Dirk Diggler. He's got the moves, the intensity, the look - I can't imagine the show without him.

The key to For the Record's continued success boils down to passion and community. Everyone who files into the newly-expanded Rockwell on this charming street in Los Feliz is committed to keeping musical theatre alive. Linger at the bar after the show and you'll see the still-animated Ferguson dancing around the almost deserted room. When he asks you to "come party in West Hollywood," you'll be asking yourself for days if it was Ferguson or Diggler throwing the party. It's a testament to how perfectly he embodies the challenging role. I think the evening's bartender summed up the evening best, "It was great, but I can't believe they are doing this here!"