In the last decade, Seth MacFarlane has built a comedy kingdom of TV shows, web series & even a big-band album. With Ted, he takes his styling to the big screen. It hits all his notes - buffoon everyman (Mark Wahlberg) with talking nonhuman friend, MacFarlane voicing said friend (a walking, talking, smoking, drinking teddy bear) and Family Guy alumnus Mila Kunis. Only this time they can launch f-bombs - and if the official trailer & Twitter feed are any indication, do they ever!

From bear to bare, something else gets launched in Magic Mike. Actually, two things: lots of money at Channing Tatum & all his clothes at appreciative ladies. Tatum stars as a superstar male stripper trying to leverage his other talents, sandwiched between protege Alex Pettyfer (I Am Number Four) & MC Matthew McConaughey. The film is inspired by Tatum's early experiences as part of a gentleman's revue in Florida. Looks like he's still got the moves! Sometimes-studio, sometimes-indie director Steven Soderbergh (Ocean's Eleven, sex, lies and videotape) helms from a script by newcomer Reid Carolin (who previously worked with Tatum as associate producer on military drama Stop-Loss).

In limited release, be it Porky's or Superbad, there are too many films about teen boys trying to get laid. But if a girl just wants to have fun, she finds herself pregnant (Juno), a punchline ("this one time at band camp..."), or punished for "sluttiness" (every slasher ever made). Norwegian coming of age dramedy Turn Me On, Dammit!, opening at Laemmle locales NoHo, Pasadena & Santa Monica, is a refreshing counterpoint. Guys aren't the only ones getting hot & bothered this summer.

Turn Me On, Dammit! opens with 15-year old Alma (Helene Bergsholm) masturbating to a phone sex line. She & the operator are on a first name basis, and the call is a birthday gift to her as a frequent customer. It's one of many trips below the belt pursuing sensual, often awkward fantasies. A close encounter with longtime crush Artur (Matias Myren) is her most sensual dream come true - and it may in fact be. When he denies anything happened, Alma's friends & community turn on her (dammit). As she tries to piece together what happened & how to fix it, her hormones only rage further out of control. 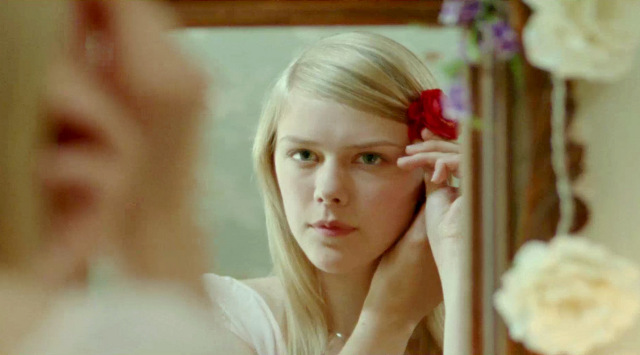 Alma (Helene Bergsholm) prepares for a party in TURN ME ON, DAMMIT!, a film by Jannicke Systad Jacobsen. Photo courtesy of New Yorker Films.

Despite its title & frank sexuality, Turn Me On, Dammit! never feels exploitative. Director Jannicke Systad Jacobsen applies her documentary background to a casual intimacy that gets inside Alma's head, not her pants. The film has a sweet charm to it, particularly Bergsholm's performance as Alma. It's easy to relate to her frustration in small-town Scandinavia; sometimes getting off is the only way to get out. Turn Me On, Dammit! plays at Laemmle's Monica 4-Plex, NoHo 7 & Playhouse 7.