Why We Love L.A. Summers: Food and Drink Festivals Aplenty 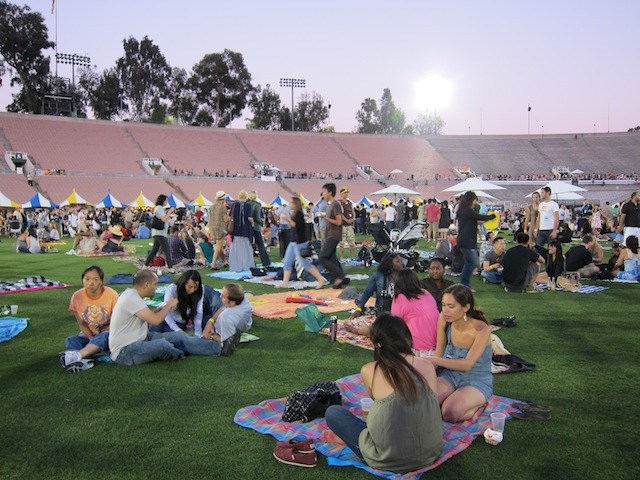 Wine and hors d’oeuvres star in this unique Friday night tasting at Union Station. Latino-owned wineries from around California pair up with local LA chefs preparing the tastiest Latino bites, and together they celebrate the best of the culture’s cuisine while supporting AltaMed, a community health organization helping underserved residents of LA. Well-known local restaurants that participated in the past include Rivera, Casita Mexicana, and El Tepayac. Tickets are $150 until June 30, but then they jump to $200.

Food trucks in Los Angeles are as ubiquitous as aspiring actors, but rarely are they all parked in one place for gluttonous purposes such as these. The LA Street Food Fest brings 65 food trucks inside the high walls of Pasadena’s Rose Bowl, as well as a few beer gardens and tequila tents. Your ticket buys unlimited food and drink plus free parking. Bring a blanket so you can take a rest in between rounds of eating — believe us, you’ll want to. It’s also one of the more affordable food fest tickets this summer. General admission passes cost $45 each and allow you to eat, drink, and be merry from 5 p.m.- 9 p.m. VIP tickets are $65 and allow for early admission at 3:30 pm. Not convinced yet? Check out the incredible list of vendors at last year’s showdown.

Extravaganza for the Senses
July 21

You can feel good about spending money to attend this one: proceeds from Extravaganza for the Senses go to the Saban Free Medical Clinic, a health facility that provides medical treatment to low-income, uninsured Los Angelenos at multiple locations around the city. Local restaurants participating in the festival include Chaya, simplethings, Jar, Upstairs 2, and more; beer and wine will be poured, too. Tickets are $100 right now, but go up to $125 on July 1. Pay $150 now to get in 1 hour earlier than general admission folks.

The LA Food and Wine Festival is only in its second year running, but it could very well become the crowned jewel of LA eating events. Keep in mind, though, that dinner with Giada De Laurentiis and cooking demonstrations by food adventurer Andrew Zimmern or Wolfgang Puck don’t come cheap. Check out tickets to these and other long events as early as possible. If eating is the goal, the Grand Tastings on Saturday and Sunday serve food by the finest and best chefs (http://www.lafw.com/index.cfm/chefs.htm) in the country. Tickets to the 3-hour tastings will set you back $150 (or you can linger a bit a wait for a LivingSocial or Groupon deal), but so would one dinner for two at any of the participating establishments.

Mill around old movie sets while you sip wine or eat great food at The Taste, a festival hosted by the LA Times and Paramount Studios over Labor Day Weekend. It’s a little too early to know all the details, but Times’ Food Editor Russ Parsons is slated to host a 4-hour tasting centered on seasonal and local cooking, and Times’ food critic Johnathan Gold will also host a tasting that showcases local restaurants that serve up cultural dishes from around the world. There will also be a cocktail night, and a picnic with your favorite outdoor fare. Pick up your tickets to these and other activities here (http://latimestaste2012.eventbrite.com/) - they’re 20% off while suppies last - and keep checking the site for more information as the dates near.

LuckyRice just held their first event outside of New York City at the Cosmopolitan in Las Vegas, and they'll be taking their night market on the road to L.A. later this summer. The night market-style festival that gives voice to Asian cultures through the lens of food and drink with cuisine from chefs like Paul Qui (Top Chef winner/ owner of Uchi, Austin), Susur Lee (Top Chef Masters/ owner of Lee, Toronoto), and Angelo Sosa (Top Chef/Social Eatz, NYC). If LuckyRice goes with a similar format to that of Vegas, there will be plenty of local chefs on hand too. Keep an eye on their site for ticket prices and more L.A. updates. Proceeds benefit City Harvest.

The Los Angeles Art Walk (http://downtownartwalk.org/downtown-artwalk/) happens the second Thursday of every month from noon to 10 pm, and plenty of food trucks and restaurants are open for your eating pleasure. The next walk is July 12.

Abbot Kinney teems with local and visiting hipsters on the first Friday (http://www.abbotkinney1stfridays.com/p/event-photos-videos.html) of every month. The event goes from 6 pm to 10 pm; stores stay open late and crowds line up for local eateries and food trucks parked along the main drag.