Why We Love L.A. Summers: Geek Out With These Science Events 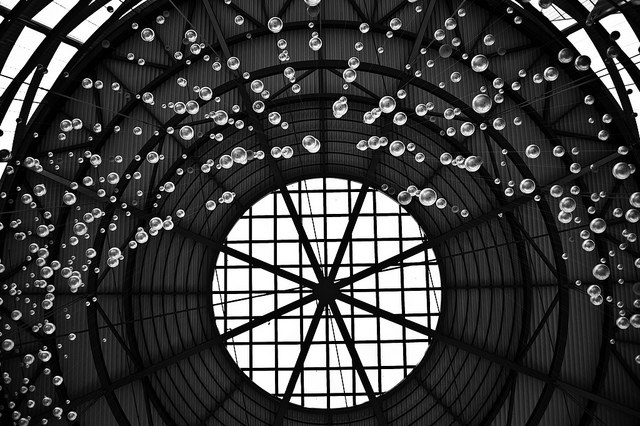 Ah, sweet, sweet summer in Los Angeles. Despite our airheaded La La Land rep, we've got plenty of events going on to please your inner Bill Nye the Science Guy (or even Bill himself, as you'll see below). Expand your mind with visits to planetariums, aquariums and more.

Note that times and details of these events could change in between now and summer's end, so do yourself a favor double-check with each of the institutions before you head out. If we missed something that you consider scientifically awesome, let us know in the comments.

Cloudless summer days are the perfect time to check out Griffith Observatory (and the beautiful views of the city), but there are special events that will make a trip up into the hills worth your time.

Public Star Party
Bring out your family and friends to party with the stars (entities composed of mostly hydrogen and helium, not TMZ regulars). The Los Angeles Astronomical Society and the Los Angeles Sidewalk Astronomers will also be in attendance, so you can chat up amateur astronomers while learning how to use an array of telescopes.
July 28 and August 25, 2 to 9:45 pm
Price: Free

The Natural History Museum always has something scientifically interesting going on.

Dino Lab
This special exhibit gives visitors a behind-the-scenes experience of witnessing how the Natural History Museum’s staff inspect, prepare and restore dinosaur fossils for research and display. You can even touch a T-rex’s toe bone and a tridactyl footprint in this much safer version of Jurassic Park. Check out the permanent exhibits, Dinosaur Hall and Dinosaur Encounters, for more of your mega-reptile needs.
Ongoing Special Exhibit
Price: $12 (Adults)

Butterfly Pavilion
With 53 different butterfly and moth species featured, local butterflies such as the monarch and the California dogface are able to meet their exotic relatives from all across the country at the Butterfly Pavilion. The living exhibition allows you to witness the graceful creatures’ interaction with each other and with plant life.
Ongoing Special Exhibit open until September 3
Price: $15 (Includes entry to the museum)

An Evening with Mayim Bialik
Dr. Mayim Bialik is a real-life neuroscientist, but may be better known for her role on Blossom or The Big Bang Theory. At her presentation, delve into her details of leading a riveting double life: brain research (specifically the malfunctions of the hypothalamus) as well as being an actress.
July 9 at 7:30 pm
Price: Free (make a reservation here)

The Huntington in San Marino houses beautiful works of art and gorgeous gardens, but it also has an extensive science collection, which makes sense given that the San Gabriel Valley has been such a hub of scientific and technological advancement because of its connection to the aerospace industry, Caltech and the Jet Propulsion Laboratory.

Beautiful Science: Ideas that Changed the World
This exhibit shows how the role of science has changed over time in four categories: astronomy, natural history, medicine, and light. The exhibit is in the recently renovated Dibner Hall of the History of Science. Here's a preview of some of the items on display.
This is one of the Huntington's permanent exhibitions.
Price: Free on the first Thursday of the month if you reserve ahead, otherwise it's $15 on weekdays and $20 on weekends

AQUARIUM OF THE PACIFIC

Summer is the perfect time to visit the aquarium in Long Beach, since it's open later for a discounted price and there's a lot of cool events going on.

Penguin-Pedia
The aquarium is hosting not one but two guest speakers to talk about penguins this summer. David Salomon, whose interest in penguins was sparked by a trip to Chilean Patagonia, will discuss his book Penguin-Pedia, which documents the world's penguins in the Falkland and Galápagos Islands, Australia, Africa, Argentina, and Peru.
June 28 at 7 pm
Price: $5

Magellanic Penguins
Ginger Rebstock, a research scientist with the University of Washington, will share her experiences living with half a million penguins. She is part of the Penguin Sentinels project, which is a study about penguin life in Argentina that began in 1983.
July 19 at 7 pm
Price: $5

Unlocking the Potential of the Southern California Urban Ocean
The Southern California is home to 20 million people, and that number is only expected to increase, even as sea levels rise, destructive coastal storms increase and the potable water supply dwindles. But Aquarium President Jerry Schubel says Southern California can have it all: a future that includes healthy ocean ecosystems, access to clean beaches, abundant marine life and new (and expanding) ocean industries that benefit the economy.
July 12 at 7 pm
Price: $5

Planetary Radio: Space Exploration Radio Series With Bill Nye the Science Guy
The Aquarium of the Pacific will host the Planetary Society for its weekly radio show, "Planetary Radio Live." This edition will feature Bill Nye, who will join host Mat Kaplan for a talk with Aquarium President Jerry Schubel, who happens to be an expert on the seas deep beneath the surface of places like Jupiter’s moon Europa. This discussion will be focused on whether life could be thriving in these hidden waters? (This is Bill Nye's first but not last appearance on our science calendar).
July 21
Price: Free (but reserve ahead)

The California Science Center always has lots of great science-minded events going on and is worth checking out for a healthy dose of science any and every day.

CHIP House
Built by the Southern California Institute of Architecture (SCI-Arc) and the California Institute of Technology (Caltech) and sponsored by Hanwha Solar, the Compact-Hyper-Insulated Prototype is a 750-square-foot, net-zero home. Insulation stretches around the frame, and its 45 solar panels generate a vast amount of electricity. A remarkable notation of the CHIP House is its master command center: an Xbox Kinect motion-sensitive video game system powered by the powerful solar panels. Hurry over because it closes soon.
Open to the public until June 30
Price: Free

Cleopatra: The Exhibition
Although the history of Cleopatra doesn’t perfectly fit within the realm of science, the Egyptian diva, *ahem*, queen, managed to snag a place in and the attention of the California Science Center. Can’t say we’re surprised—she did also seduce the likes of Julius Caesar and Mark Antony. The exhibition features more than 150 relics from Cleopatra’s lost palace in Alexandria.
Open to the public until December 31
Extended hours: 10 am to 6 pm on Saturdays and Sundays in July
Price: $19.75 (Adults)

Space Shuttle Endeavour
OK, you're going to have to pencil this one in, but this is an event that we'd love to see this summer (fingers crossed!). The NASA retired space orbiter Endeavour will permanently reside at the California Science Center to enthuse science’s movers and shakers. But we're not sure when exactly that will happen. Once transferred to Los Angeles, Endeavour will be housed in a temporary structure until the new Air and Space Center is built, where the orbiter will then serve as the center’s main attraction. Look out for news on the center's Facebook and Twitter pages. You can support the EndeavourLA campaign here. by making a donation or sponsoring a shuttle tile.
Date not yet announced (latter part of 2012)
Price: Free

If you're into Mars, like really into Mars, the convention center in Pasadena has not one but two conferences for you.

If you’re eagerly counting down the days to the Red Planet’s landing of NASA’s Curiosity rover, you’re definitely not alone. Join approximately 3,000 other space enthusiasts in receiving a play-by-play narration during the rover’s descent and landing on Mars. The aforementioned Bill Nye The Science Guy will even make an appearance.
August 4, 9:30 am to 5 pm
August 5, 2 to 11:30 pm
Price: $60.50 for both days or $33 for a single day (non-members); purchase tickets here

The 15th Annual International Mars Society Convention
The 15th Annual Mars Society Convention is another vehicle for those interested in Mars to come together and participate in discussions about exploration on the Red Planet. Enjoy debates, panels, a banquet, entertainment and a live showing of NASA’s Curiosity rover landing on Mars.
August 3 to 5
Price: $210 (non-members); purchase tickets here:

If you live on the eastern edge of the county, you don't have to trek out to Los Angeles or even Pasadena to learn more about space. Mt. SAC has a relatively new planetarium with events going on even during summer break.

Secrets of the Sun
Our largest star’s pretty little secrets are revealed in this presentation about its impact on the solar system, especially the planet Earth.
July 18, August 1 and August 15, 12:30 to 1:30 pm
Price: Free