Your Guide To Summer Outdoor Movies in L.A. 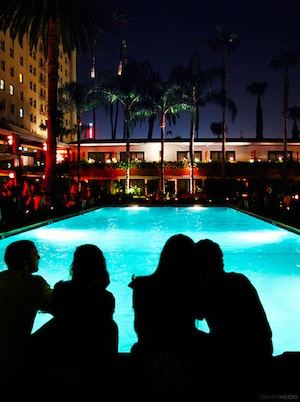 What more can you ask for than days followed by nights at the pool, late night movies, and a continuous ﬂow of refreshments? Los Angeles is determined to bring this to its favorite people (that's you!) throughout the entire summer. From The Academy, to the Rose Bowl Aquatic Center, to Montage, to the Hollywood Roosevelt, the city is rallying to bring you everything from old time classics to new comedies every single week.

WEEKLY SCREENINGS AT HOLLYWOOD ROOSEVELT'S TROPICANA POOL
The Hollywood Roosevelt Hotel is giving Angelenos yet another reason this summer to head in its direction. The hotel has cultivated an entire week of poolside nightly activities, including Movie Monday, which is said to be the best night of the week. Every Monday a different celebrity or ﬁlmmaker chooses a movie to be shown and then hosts the event that night. They project a huge screen at the end of the pool and once sunset hits, everyone cozies up to watch the movie under the stars. There is no existing movie schedule, as it's up to the host each week, but they've previously played Ferris Beullers Day Oﬀ and Legend Cant make it on Mondays? The Roosevelt keeps the entertainment going: Tuesday nights allow nighttime swims, and on Thursday nights, synchronized swimmers perform to old Hollywood music. There's always something happening at the Roosevelt, and you are guaranteed to have fun.

OSCARS OUTDOORS
The Academy is hosting Oscars Outdoors at their new open-air theater located on the Academy Hollywood campus. Every Friday and Saturday starting June 22 through August 18, The Academy presents the perfect Hollywood night. Bring a blanket, bring friends, bring a date and buy food at one of the many food trucks available, then spend your night lying under the stars watching the classics. With possibly the best selection of movies this summer, The Academy is showing everything from Raising Arizona to Young Frankenstein. Tickets are $5 for general admission and $3 for students and Academy members. Here's the full list of summer showings:

Feel like a Friday or Saturday night without the kids? Montage has teamed up with Paintbox to bring you Children’s Night Out. Drop your kids off for an exciting themed night of both indoor and outdoor games, interactive activities, arts and crafts, and Wii while you and your partner hit the town. The kids are given dinner, a feature film is put on and popcorn is provided. This event is oﬀered to the hotel, spa and dining guests from 6pm to 10pm for $70 or from 8pm to 10pm for $40. 24-hour advanced notice is requested. For reservations, call (310) 860-7959.

CINESPIA SCREENINGS AT HOLLYWOOD FOREVER CEMETERY
Cinespia returns again this summer at L.A.'s favorite place to catch a movie — the Hollywood Forever Cemetery. The legendary burial ground at Santa Monica and Gower — the final resting place of many a Hollywood star and L.A. noteworthy — comes alive at night as cinephiles pack the grounds every Saturday night to have a unique film experience. Bring chairs, blankets and a picnic (yes, booze is allowed), and take part in a great L.A. pastime. Gates open at 7:30pm, and DJs will spin selections until the movie starts at 9pm. The event often gets sold out, so Cinespia is offering pre-sale tickets online for $11 (as opposed to $10 at the door). No comprehensive summer schedule is up yet, but Roman Polanski’s Chinatown will grace the cemetery this Saturday, June 23. Labyrinth is slated to show next Saturday, June 30.

Recommended: Coming early to set up camp and pay respects to Cecil B. DeMille, both Douglas Fairbanks Sr. & Jr., Johnny and DeeDee Ramone and other buried legends.

DIVE-IN MOVIE NIGHT AT THE ROSE BOWL AQUATIC CENTER
For its annual movie event, Rose Bowl Aquatic Center is hosting a family friendly showing of Dolphin Tale at the recreational pool on June 23. The movie will be projected onto a big screen at the end of the pool complete with surround sound. Guests may stay in the shallow end of the pool during the movie; anyone under age 8 must be accompanied by an adult (18+). Doors open for this free showing at 7:45pm and the movie will start at sunset. Make a night of it and arrive at 6:30pm for the Family Swim. Only $2 for adults (18+) and $1 for kids (under 17). Food is available for purchase at the Rose Bowl; outside food and drink is not allowed. It's ﬁrst-come, ﬁrst-serve, so don’t worry about making reservations. This is the perfect nighttime activity that your whole family will love.