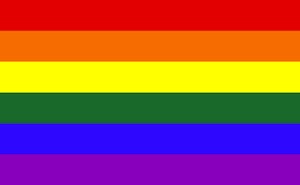 A recent stabbing in Echo Park is being investigated as a hate crime, and the victims may have been targeted because they displayed rainbow flags on their bicycles.

The victims were stabbed as they were waiting for a bus at Echo Park Avenue and Montana Street just after midnight on May 24. Although the victims are straight, they are gay allies who wear rainbow patches and stickers.

"A police detective assisting with the investigation said the two victims said they believed the rainbow flag on their bikes prompted the suspects to yell at them," reports the Eastsider LA.

The Los Angeles Police Department released footage of the attack. In the description of the first video, the LAPD writes that the suspect yelled out to the victims "You guys are fucking faggots!" before he ran after the victims.

The suspects remain at large.

Now, notes the Eastsider, the community is coming together to discuss the hate crime. A town hall meeting has been scheduled for June 26. More from the Eastsider:

The town hall is being organized by El Centro Del Pueblo, an Echo Park social service agency, in partnership with the office of Councilman Eric Garcetti and other organizations. “We are calling on the Echo Park Community to declare that a hate crime against any one member of our community is a hate crime against the entire community,” said El Centro Executive Director Sandra Figueroa in an email. “Join me for a community response at a Town Hall Meeting El Centro is hosting that calls for acceptance, tolerance and education.”

Anyone wishing to attend the town hall, which will be held from 6 p.m. - 7:30 p.m. at El Centro Del Pueblo, should RSVP to conradoterrazas@roadrunner.com.