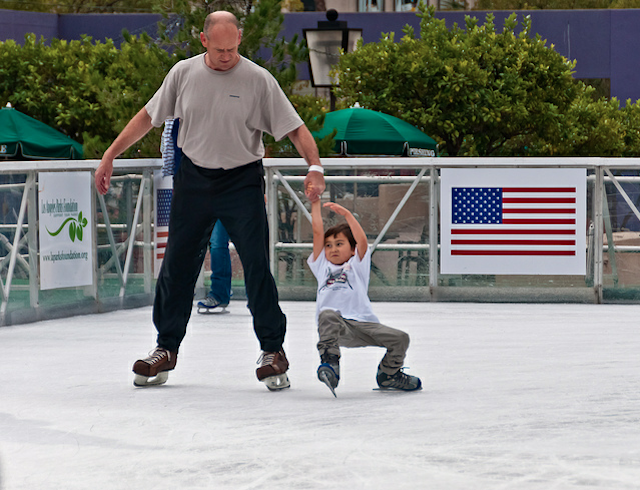 FILM: The LA Film Fest’s Coffee Talk series returns today, giving aspiring directors, screenwriters, composers and actors the opportunities to chat with mentors like Lawrence Kasden, Michael Penn and John August. Check the schedule. Buy tickets for these or other shows as soon as possible, or wait in a rush line with fellow fest fans.

VISIT: Keeping with their Family Sunday tradition, the Autry Museum hosts a Father’s Day celebration today that's bound to keep both kids and adults entertained. Visit between 11 am and 3 pm for live music from the Western Music Association, docent-led tours, gold-panning and storytime for kiddos.

CLASSIC: Still not sure what to do with Dad? Take him back in time with a free screening of Back to the Future at UCLA’s Hammer Museum in Westwood. The show starts at 11 am and seats are first-come, first-serve.

BIKE: Ever taken a tour of South L.A.? How about on a bike? Today is your chance to do it with a big group biking from Augustus F. Hawkins Natural Park to Watts Towers. The tour kicks off at 10 am at the park at 5790 Compton Ave, and it will ultimately end up at the Watts Towers. The entire ride should last until around 2 pm. Bring some snacks or some cash for patrons along the way. For more information about the event check out our write-up or visit the event's Facebook group.

TALENT SHOW: Silver Lake dance studio The Sweat Spot hosts its 2nd Annual Talent Show this weekend with performances at 7 pm and 10:30 pm tonight. Grab your tickets here and get ready for a wild ride: a pair of singing rollerskaters, an 80’s-inspired burlesque troupe, and a glow-in-the-dark African dance group.

ALL ABOARD: Calling all royal family fanatics! This weekend the Queen Mary opened a special exhibit entitled Diana: Legacy of a Princess. Many of Di’s formal gowns will be on display, as well as other memorabilia owned by British Royal Family members. Your exhibit ticket includes general admission and an audio tour of the ship, so you can brush up on some World War II history while you’re at it.

FILM and LITERATURE: Celebrate diversity at the Mixed Roots Festival in downtown; the event showcases artwork and stories from multiracial people and families. Today’s schedule includes a screening of short films, workshops on directing actors and writing about the mixed race for a mainstream audience and literature readings for adults and kids.