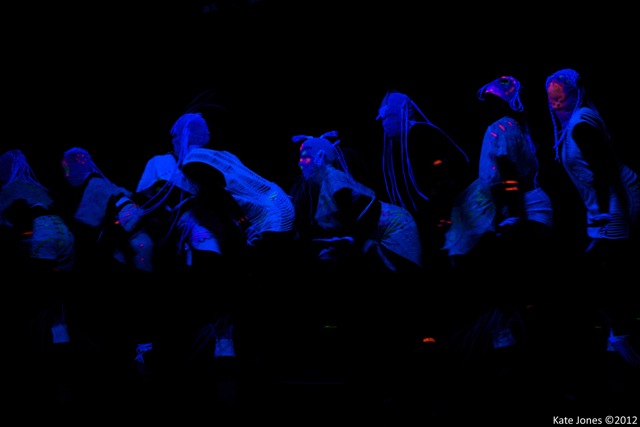 TALENT SHOW: Silver Lake dance studio The Sweat Spot hosts its 2nd Annual Talent Show this weekend with performances at 7 pm and 10:30 pm tonight. Grab your tickets here and get ready for a wild ride—a pair of singing rollerskaters, an 80’s-inspired burlesque troupe, and a glow-in-the-dark African dance group will be in the eclectic mix of performers.

FILM and LITERATURE: Celebrate diversity at the Mixed Roots Festival in downtown; the event showcases artwork and stories from multiracial people and families. Today’s schedule includes a screening of short films, workshops on filmmaking and story writing, and literature readings for adults and kids.

MUSIC: Head to Pasadena today for 12 straight hours of free tunes at the Make Music Pasadena festival. More than 100 indie bands are scheduled to perform on stages around the city, including up-and-coming groups like Grimes, Cults, Grouplove and Electric Guest.

ART: LACMA and its neighbors host ArtWalk 2012 today, featuring live music, dancing, and hands-on art experiences in galleries along Miracle Mile. Make a pop-up book at 1pm with bookshop and print studio Pop-Hop, or visit the Craft Art and Folk Museum between noon and 6pm to join a do-it-yourself workshop led by local artists.

FILM: The LA Film Fest is in full swing and the schedule is packed with choices. Tickets are still available for some of today’s screenings, but you’ll have to wait in a rush line to catch a conversation with the cast of Breaking Bad or with musician/composer Danny Elfman. If you’re on a budget, watch "Star Trek II: The Wrath of Kahn" for free at 8:30 pm tonight. Special guest Leonard Nimoy will be there and guests are encouraged to come in costume.

ALL ABOARD: Calling all royal family fanatics! Today the Queen Mary opens a special exhibit entitled Diana: Legacy of a Princess. Many of Di’s formal gowns will be on display, as well as other memorabilia owned by British Royal Family members. Your exhibit ticket includes general admission and an audio tour of the ship, so you can brush up on some World War II history while you’re at it.