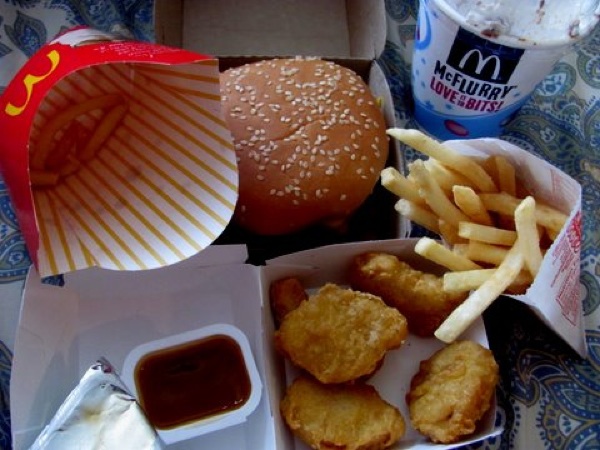 McDonald's senior director and executive chef Daniel Coudreaut might say there's nothing dangerous about his fast food chain's menu, but that's about as laughable as LAUSD claiming pizza is a vegetable.

The Physicians Comittee for Responsible Medicine outlined the five unhealthiest meals for children, and of course, Mc Donald's is in the top 5. Their Cheeseburger Happy Meal, which contains more sodium than 13 orders of McDonald's kids fries, came in second place, followed by Sonic Kids’ Jr. Burger Meal that packs in more sugar than two Twinkies, Burger King's Hamburger Kids Meal, which has as much cholesterol as a whopping six slices of pork bacon, and Denny's Build Your Own Jr. Grand Slam, with 100 more milligrams of sodium than the government recommendations for a children's breakfast. The winner of the ickiest meal for kids is Chick Fil A's Grilled Nuggets Kids Meal, whose cholesterol count is equivalent to a Big Mac. Congrats?

Considering all the garbage being fed to kids these days, we're surprised that there aren't more young food bloggers like Scotland's Martha Payne taking action. The 9-year-old's blog was censored for the disgusting school lunch photos she posted, but the ban was lifted today after the internet (and the likes of Jamie Oliver) exploded in protest.

Now that she's back on the blogging bandwagon, maybe she'll come out to review 13-year-old super stagiaire Flynn Mc Garry's cooking in L.A. Kids these days...