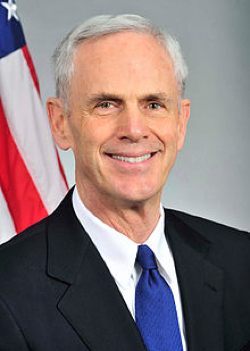 The Los Angeles County Sheriff's Department has charged U.S. Secretary of Commerce John Bryson after a series of traffic incidents in the San Gabriel Valley on Saturday afternoon. Apparently authorities, who eventually found Bryson, 68, unconscious and alone in his vehicle, do no believe drugs or alcohol were involved. Here's how LACSD describes the incident:

Secretary Bryson was allegedly travelling southbound in a Lexus on San Gabriel Boulevard and rear-ended a Buick occupied by three males that was stopped on the street awaiting a passing train. Bryson spoke with the males, then left the scene, hitting the same car again as he left the scene. The three males followed him in their car while calling San Gabriel Police officers via 911 and asking for assistance.

Bryson drove into the neighboring city of Rosemead. Rosemead is policed by the Temple Sheriff's Station of the Los Angeles County Sheriff's Department.

Bryson then allegedly caused a collision involving a second car at about 5:10PM while driving southbound on San Gabriel Boulevard at Hellman Avenue in the city of Rosemead, where he was found alone and unconscious behind the wheel of his vehicle. He was treated at the scene by Los Angeles County Fire paramedics and transported to a local hospital for medical aid where he was admitted for treatment for non life-threatening injuries.

Two of the three males in the Buick (first collision) were treated by paramedics for complaint of pain.

The second vehicle that was struck was a Honda Accord occupied by a man and a woman, one of whom complained of pain as a result of the collision, but suffered no major injuries and declined medical aid.

There was minor damage to the Lexus and Honda Accord.

Bryson himself was treated for minor injuries; the AP Tweeted that Bryson suffered a seizure. The San Gabriel Police Department have taken possession of Bryson's car, and the SGPD and LACSD are working together in the investigation.

The Commerce Department issued a statement, "Secretary Bryson was involved in a traffic accident over the weekend in Los Angeles. He was taken to the hospital for examination and has been released. He has sustained no injuries and the investigation is ongoing."