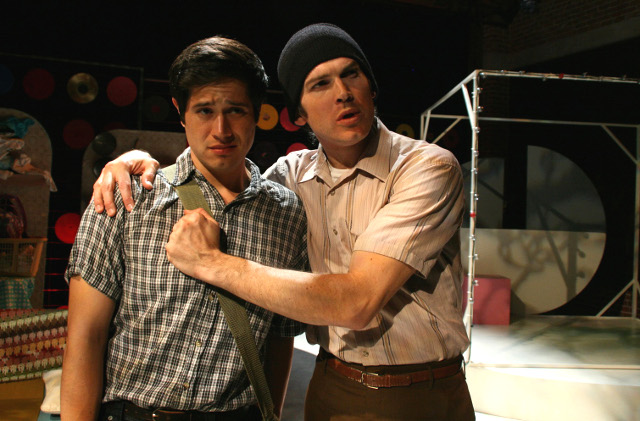 Jorge Diaz and Daniel Chácon are the standout performers in "Evangeline, The Queen of Make-Believe" (Photo by Theresa Chavez)

Civil rights. Rock and roll. Women's liberation. Vietnam. The 1960s was one of the most disruptive periods in U.S. history, and is constantly explored in film, television and theater. One chapter of the story often untold in popular culture is about the challenges facing the Chicano community in East L.A. during this tumultuous time. Evangeline, the Queen of Make-Believe, a new play at the Bootleg Theater, hopes to fix this omission.

Set in 1968 East L.A., the play follows the college-aged Evangeline (Catherine Lidstone) as she transforms from a diligent and obedient daughter to a blossoming go-go dancer on the Sunset Strip. A series of lies about her new job and Anglo boyfriend James (Daniel Chácon) puts her on a path of conflict with her traditional, widowed mother (Danielle Barbosa).

Lidstone and Barbosa deliver promising but uneven performances. When they are joined onstage by the excellent actors Jorge Diaz (playing Evangeline's brother Ramon) and Chácon (who plays Ramon's friend Edgar in addition to James), their performances noticeably improve. The performers also benefit from a strong supporting cast of Karen Anzoategui (Evangeline's friend Rita) and Georgia Reed (go-go dancer Sandy), but it's only when Garcia and Chácon are onstage that the fears and passions of the tumultuous times are effectively conveyed.

Music plays a central role in Evangeline, but instead of the expected Beatles and Bob Dylan classics, audience members are treated to about a dozen Los Lobos songs. This is East L.A., not Mad Men, after all. Using music by the award-winning songwriters David Hildalgo and Louie Pérez was an inspired choice, but it was poorly incorporated into the play. Between scenes, CAVA (Claudia Gonzalez-Tenorio) emerges on stage and lends her beautiful voice to sing the Los Lobos songs. On a couple of occasions, performances are greatly enhanced by wonderful videos by Claudio Rocha. The rest of the time, however, what should be moving musical numbers are more reminiscent of impromptu karaoke performances than a theatrical embodiment of the community. The music needs to either be more fully incorporated into the play or must be accompanied by more multimedia creations.

One of Evangeline's biggest strengths is the live rock band led by Scott Rodarte of Ollin, although it didn't make sense to hide the band behind off-stage behind François-Pierre Couture's commendable sets.

After three years of development, the show would have greatly benefited from more than three weeks of rehearsals. Several of the actresses stumbled through their lines and didn't seem to be comfortable yet in their roles. The main reason why Evangeline, the Queen of Make-Believe doesn't soar is because the script attempts to tackle important topics, but what is ultimately shown to the audience is rather shallow. Despite the unique setting of East L.A., it relies on the same cliches in every 1960s coming-of-age story.

Well-read adult theatergoers may not be the right audience for Evangeline, but the play would serve as a powerful work for local students who may not be aware that Los Angeles has its own story about war, troubled race relations and the evolving role of women in the workplace and at home. I would like to see co-creators and directors Theresa Chavez and Rose Portillo focus their energies on bringing these important issues, and Evangeline to local schools.

Evangeline, the Queen of Make-Believe runs through June 2 at the Bootleg Theater. Tickets are $32 and available online.