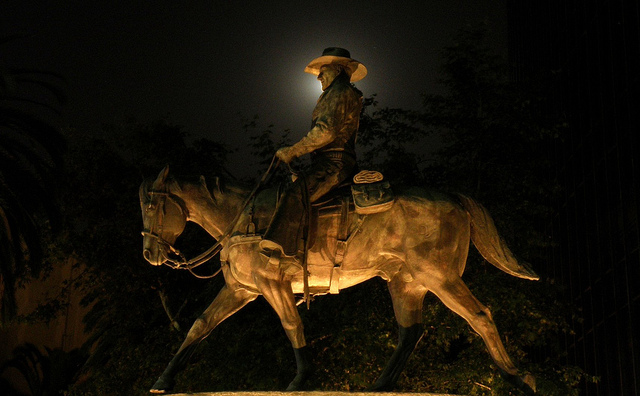 Western fans — particularly Western fans with vision problems — your time to rejoice has arrived. The eye patch that John Wayne wore as Rooster Cogburn in "True Grit" is going on the auction block, and experts believe that for a mere $35,000, it could be yours.

In a statement, Nate Sanders of Nate Sanders Auction House said, “This is the ultimate piece for fans of the western movie, a uniquely American genre."

The film was made in 1969, and Wayne wound up winning an Oscar for his performance. He wore the patch again in the sequel, "Rooster Cogburn."

Wayne donated the patch to Southern California Chamber Symphony Society auction in 1975, and included in the package is a letter from the actor dated November 4,1975, stating the following:

Dear Friend: Please let this certify that the enclosed 'eyepatch' is one which I wore during the filming of 'True Grit' and 'Rooster Cogburn'. Now that my eye is better I'm happy to donate it to such a worthy cause - the Southern California Chamber Symphony Society auction. Wear it in good health! Sincerely John Wayne

You can bid on this delightful movie memorabilia until May 29.