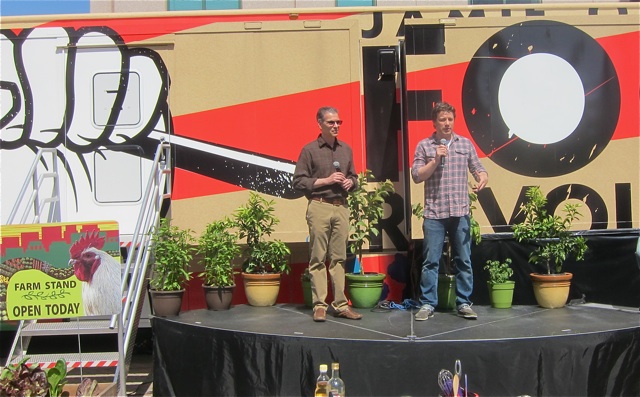 Jamie Oliver in front of his Big Rig mobile kitchen with David Feinberg, President and CEO of the UCLA Health System (photo by Krista Simmons)

As evidenced by the rise of the rock star chef, the proliferation of food paparazzi, and the overwhelming amount of food blogs on the interwebs, foodie-ism has reached critical mass. Yet there's a disconnect between the hyper-educated culinary elite and the general populus, and our nation's food system is in a dire state. With instances of food-borne illnesses and dietary-related diseases on the rise, it seems there is a diverse but universal lack of food literacy both here and abroad. We've severed ties with our food and where it comes from — so much so that some school children can't even identify a ripe tomato.

Celebrity chef Jamie Oliver aimed to change that through his first annual Food Revolution Day, held this past Saturday. Through a new form of digital activism, global supporters of a new food order hosted classes, dinners, and online meet-ups, all championing the value of healthful, accessible food for all. Thousands of events in over 600 cities took place with hopes of connecting advocates for change. 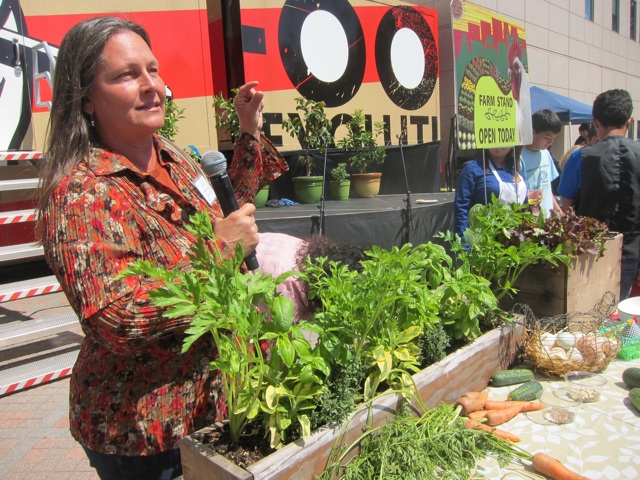 Oliver chose to position himself in L.A. for the festivities, where he hosted a demo in partnership with David Feinberg, President and CEO of the UCLA Health System, teaching kids from the Boys and Girls Club the value of farm-fresh foods. The children worked in the UK-born chef's Big Rig kitchen, a massive gutted RV that's been retrofitted as an instructional cooking lab. The students made salads and other goodies for attendees and passerby, while the Green Lab Urban Farm answered gardening questions from the crowd. Later in the evening, Oliver hosted a celeb-studded dinner at Gjelina, where guests, including his cooking buddy Adrian Grenier and Jimmy Kimmel, showed up to discuss how to further the movement. 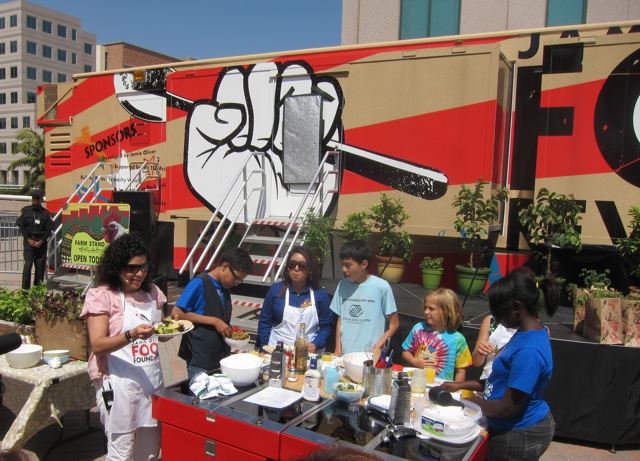 When asked why he situated himself in L.A. for the event, Oliver replied, "Food Revolution's heart is here in L.A. It's positioned to drive the most change in the States... When you go to the poorest communities here, you can see the Hollywood sign, but there's no fresh food available."

Oliver clearly isn't alone alone in his ambitions. In an open Google "hang out" held on Saturday afternoon, representatives from Malaysia, Australia, the UK, and the Southern United States all shared stores of the various ways they're pushing for change in their respective communities.

"As a foreigner, there's stuff that happens here [in the U.S.] that's really odd. There are pesticides and chemicals you can use here that are banned in Europe," Oliver says, with an undertone of hope. "But when the Americans are told the truth, they actually make pretty good decisions."

If you'd like to learn more, be sure to check in after lunch hour to read our full interview with chef Jamie Oliver.