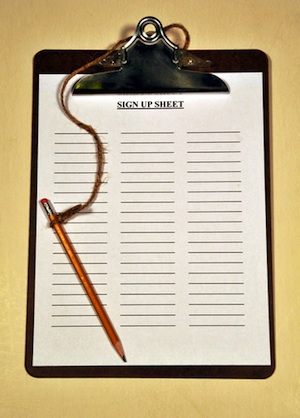 Sign-up sheet via Shutterstock
By Gabriela Worrel / Special to LAist

Earlier this month, the California Right to Know campaign, which spearheads a State Ballot Proposition that would require labeling of genetically engineered foods, reported collecting 971,126 signatures—nearly double what is required to qualify for placement on the November ballot.

The state requires at least 504,760 valid signatures to qualify, and the organization and its partners aimed to collect 850,000 signatures. The fact that the campaigners—most of them volunteers—were able to almost double the required signatures in ten weeks of canvassing may note the strong desire of Californians for increasing transparency in their food supply. Such food supply often arrives on the dinner plate from thousands of miles away.

The California Attorney General has stated that there could be some potential cost up to
$1 million associated with monitoring compliance, along with unknown legal costs.

One coalition has already formed to speak out against such an initiative being voted into law in the fall. The Stop The Costly Food Labeling Proposition coalition represents several business, agricultural, retail, tax, and health organizations. The group opposes the initiative, citing the law as unnecessary and costly for food providers, while being a boon to trial lawyers. The group claims this requirement will confuse the public with new labels that are "scary-sounding" and not required outside of California, and will be a burden on the supply chain.

The opposition group’s website claims only one group representing consumers, called Consumers Coalition of California. Curiously, there is no record of such a group available on the IRS’s web search function. A similarly-named organization, the Consumer Coalition of California, is listed as a recognized organization with the IRS, but this Torrance-based organization lacks a current 990 form available to the public. More information is needed to clarify the nature of this group representing California consumers.

A National Poll done in March 2012 by the Mellman Group shows that over 90% of Americans favor labeling for genetically engineered foods—an unusually high number in today’s increasingly polarized political climate. A survey done in the State of Vermont confirms similar public opinion. California voters will get the opportunity to decide for themselves in November, so go do some research, and get your pens ready!