Manny Pacquiao's Anti-Gay Marriage Remarks Find Him Banned From The Grove (and Misunderstood?) 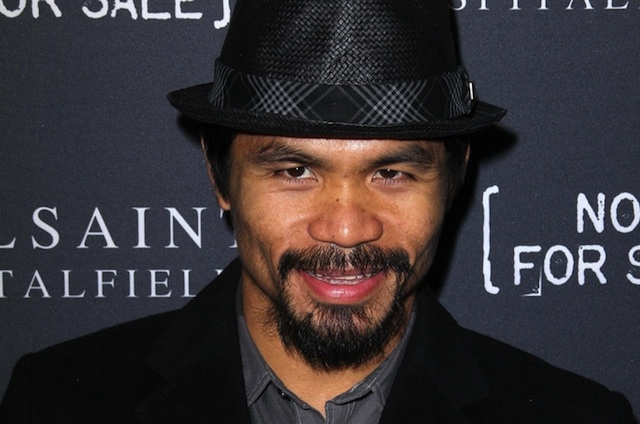 Boxer Manny Pacquiao's recent remarks regarding same-sex marriage has gotten him into some hot water, and out of one of L.A.'s trendiest shopping destinations.

The athlete's thoughts on gay marriage were published in an interview with National Conservative Examiner and in response to President Barack Obama's recent declaration he was in favor of gay couples marrying.

From the article, published May 12:

"God's words first ... obey God's law first before considering the laws of man," says Pacquiao, addressing Obama's pronoucement on legalizing same-sex marriage during an exclusive interview Friday night with the National Conservative Examiner in his residence at the Palazzo Complex in Los Angeles here in California.

Pacquiao's directive for Obama calls societies to fear God and not to promote sin, inclusive of same-sex marriage and cohabitation, notwithstanding what Leviticus 20:13 has been pointing all along: “If a man lies with a man as one lies with a woman, both of them have done what is detestable. They must be put to death; their blood will be on their own heads.”

Pacquiao continues: "God only expects man and woman to be together and to be legally married, only if they so are in love with each other."

"It should not be of the same sex so as to adulterate the altar of matrimony, like in the days of Sodom and Gomorrah of Old."

America should be the model of morality for other countries to emulate and must have the responsibility to uphold the Scripture to the highest order of God's command, he adds.

Pacquiao believes same-sex marriage is an abomination and its advancement should be stopped starting from the high offices of the U.S. to block possible legalization.

"Pacquiao, a devout Catholic, is a congressman in his homeland of the Philippines, where he has a record of voting along conservative lines," notes KTLA.

The writer of the controversial article has already taken several reaction articles and their authors to task for their responses to the piece, claiming bias and word-twisting. The author points to an article from the LA Weekly, asserting: "Such article, I believe, carries unfair, convoluted remarks, as a matter of opinion."

The controversy has also gotten Pacquiano on the persona non grata list at The Grove, where the entertainment news show "Extra" is filmed. From The Grove's Twitter account Tuesday:

Boxer Manny Pacquiao is not welcome @TheGroveLA. @TheGroveLA is a gathering place for all Angelenos, not a place for intolerance.

Now Pacquiano is also backpedaling, in a way. On his personal website are several response articles attempting to clear the air. From one:

“I’m not against gay people… I have a relative who is also gay. We can’t help it if they were born that way. What I’m critical off are actions that violate the word of God. I only gave out my opinion that same sex marriage is against the law of God.”

Yikes. Can the boxer swing enough times against some very vocal opposition and come up with a clean face? Or is he just misunderstood and misrepresented in the press?