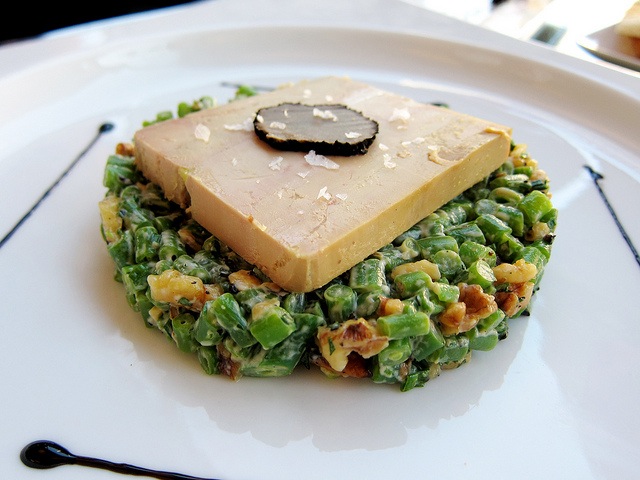 In California, many chefs feel that right now they have to fight for their right to foie gras. Serving the fattened duck liver, a delicacy, is going to be illegal come July 1, when a 2004 ban finally goes into law. Leading up to foie's final hurrah on menus around the state, local restaurants and chefs have been holding special foie-focused events to make sure diners have their fill, and to fly in the face of foie haters.

In person, last night outside Mélisse, a group of animal rights activists gathered, as explained by CBS2:

Outside the restaurant demonstrators made their message clear.

“They have large metal tube shoved down their throats three times a day, force-feeding massive quantities of corn gruel,” [Amber] Coon [of the Animal Protection and Rescue League] said.

But how about this approach to fighting foie gras? Chef Dan Moody details a more viral campaign to protest the use of the ingredient on his blog:

The foie protestors have engaged in a coordinated attack to smear Melisse by writing blatantly false reviews, or reviews that have nothing to do with the service or food at the restaurant. These reviews are in direct violation of Yelp’s Terms of Service, and Yelp needs to take action to correct this immediately.

Moody elaborates, with screengrabs of the conversations, that the decision to use false reviews as protest emerged following what he describes as "an afternoon of banter between pro- and anti- foie gras advocates on a [F]acebook event page intended to coordinate a protest" at the restaurant. On Facebook, Moody noted "one anti-meat crusader decided that the way to get back at chefs who serve foie gras is to simply write bogus Yelp or foursquare reviews against the offending chefs."

Ethics, schmethics right—even in a battle over what some might say is centered around ethics? Moody isn't shy about his take on the faux reviews:

"To Yelp: You need to take care of this. Now.

To the Foie Protestors: You are despicable. This just further exposes that you have no dignity, and will stop at nothing to destroy your opponents."

Some chefs have previously gone on record saying if serving foie is wrong, they don't want to be right. One of those chefs is Laurent Quenioux, who said: "They can send me the foie gras police."