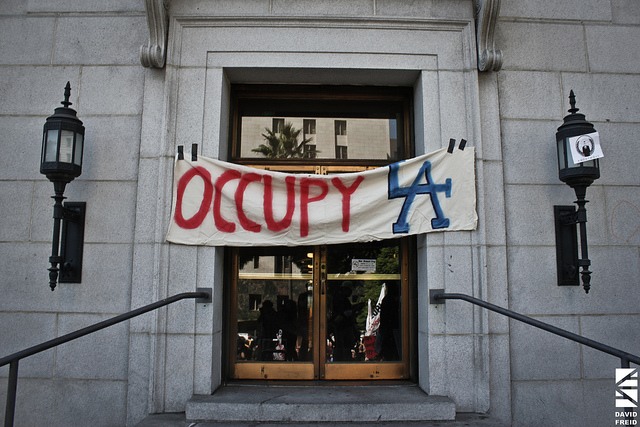 Photo by David Freid via the LAist Featured Photos pool

The numbers are in, and they are about $2 million higher than first anticipated: Occupy L.A.'s City Hall encampment, and its ultimate clearing, cost Los Angeles taxpayers $4.7 million, according to a report released today from City Administrative Officer Miguel Santana.

That increased price tag for the protests, two-month-long camp out, and subsequent restoration of the City Hall lawn is due to newly reported costs to police Occupy L.A. the final tab for repairs at City Hall, explains City News Service.

City Councilman Mitche Englander thinks that this grim fiscal report should be a warning to his colleagues who were so quick to "approve" of the encampment last October that maybe they should think such endorsements through a little harder. "For every resolution or position the city might take, there's a cost,'' Englander said, citing L.A.'s ongoing fiscal crisis.

The City gave the Occupy LA protesters a pass by letting them set up on the lawn at City Hall October 1, 2011; the group said they'd stay until at least December 1, and the City Council said they could stay as long as they wanted. Turns out they didn't mean that, and on the night of November 29, 2011, the city and the Los Angeles Police Department raided the encampment, arresting over 200 people, including many who were not even in the park or part of the encampment.

As it turned out, the initial support of the Council and Mayor Antonio Villaraigosa is what the Occupiers referred back to time and time again when those same civic leaders indicated they were ready to do whatever was necessary to get the protest site at City Hall dismantled.

The damage to the lawn at City Hall prompted a full makeover (hello, official plant of Los Angeles!) and the city has received $411,508 in donations and rebates to cover the cost of the restoration. Plus, the City has long said it will take some budget cuts to help make up the cost of the encampment.

But another set of recent numbers shows that more than half of surveyed Angelenos support the Occupy movement. A report released earlier this month from the Thomas and Dorothy Leavey Center for the Study of Los Angeles at Loyola Marymount University indicates 53 percent of Angelenos agree with the Occupy movement and its values, with respondents indicating they "strongly agree" or "agree" on the survey.

Perhaps a new survey querying how many Angelenos support having to pay their portion of the $4.7 million cost might yield different results.