Past & Present: Celebrate 73 years of Union Station with Cocktails and a Free Tour 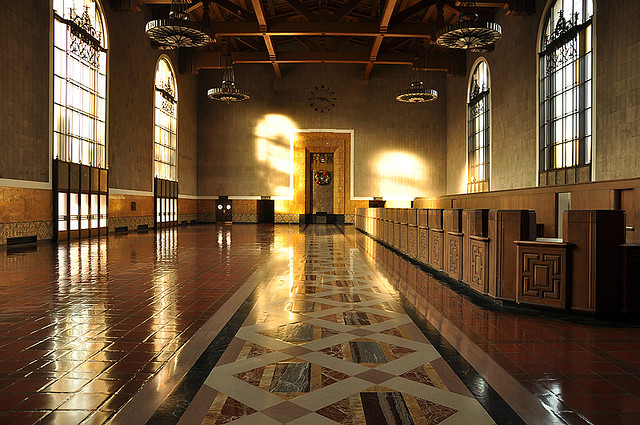 - by Adrienne Dorsey/Special to LAist

This week marks the 73rd anniversary of the opening of Union Station, and to celebrate the Art Deco Society of Los Angeles is hosting Cocktails in Historic Places along with a free tour of the downtown landmark this Friday evening, 6 to 8 pm. The iconic station, where Spanish colonial revival, Art Deco and Streamline architecture merge, has been a transportation hub and mainstay in feature films from the beginning.

Considered the “Last Great Train Station,” Union Station was originally the site of LA’s Chinatown and sparked numerous court battles before its grand opening in 1939. The informal hour-long tour will include a brief history of Chinatown’s shady past (think underground opium dens and white slavery) and how Union Station was finally built on a foundation of questionable real estate deals and political corruption.

Cocktails will be served starting at 6 pm tomorrow Traxx Bar, located inside Union Station near the Main Entrance and South Patio, followed by a historical/architectural tour at 7 p.m. led by Joan Renner, board member of the Art Deco Society.