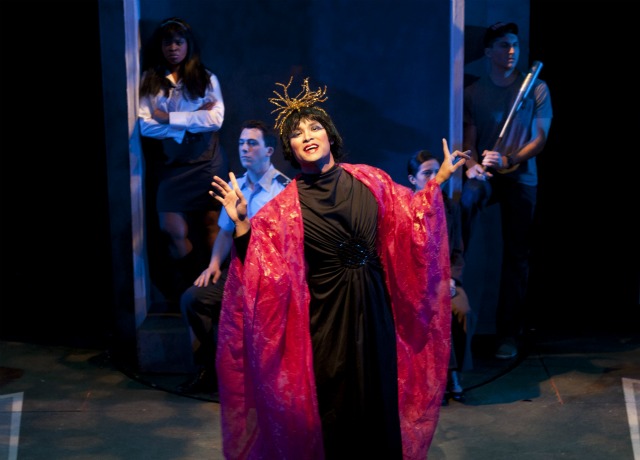 Ramone de Ocampo in 'Girl Most Likely To' (photo by Adam Blumenthal).

Michael Premsrirat's gender-questioning drama The Girl Most Likely To is playing at Los Angeles Theatre Center (LATC). The music and dance-filled work focuses on issues of gender identity, self-love, Filipino culture, and the challenges of post-immigration life in the United States through portraits of unique central characters. The play is a bubbly staging that honors very under-represented demographic groups through excellent direction and capable performers.

Like two sides of the same coin, The Girl Most Likely To reveals two story lines that span generations and continents: Half of Premsrirat's script takes place in the Philippines during the 1950s where the audience is introduced to Mama Cid (Ramone de Ocampo), a self-assured gay man who identifies with the Filipino notion of "bakla" — a loosely defined notion of a third gender specific to the Philippines. Mama Cid is in an unexpected relationship with an American soldier from Texas. The other half of the play depicts a young Filipino-American teenager, known only as The Boy (Tobit Raphael), at the crux of his transformation from male to transgender. The Boy's narrative is propelled by his understanding mother (Fran De Leon) who is worried that her son will become a victim of a hate crime and his only friend, The Girl (Mandela Bellamy), a self-depreciating Judas. 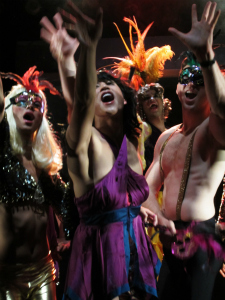 Tobit Raphael in 'Girl Most Likely To' (photo by Adam Blumenthal).
The entire cast of is graceful and capable. Playing insecure teenagers, Raphael and Bellamy perfectly balance sass and youthful hesitancy in their coming-of-age roles. De Ocampo is full of poised certainty, pageantry, and pluck as Mama Cid. De Leon gives the best performance of the production, infusing Li'l Mama with subtle empathy while merging gentleness with determination.

Premsrirat's play is a bit preachy and sometimes feels like an unfulfilled fairy tale, but his narrative ultimately reflects deserving stories that are rarely represented in any sort of art or media, that of Filipino culture and the struggles of transgender youth. Under the direction of Jon Lawrence Rivera, the work has all of the markers of an after school special, but one that is effortlessly charming and easy to indulge in. Rivera has molded a cheery, fluid, and skillfully orchestrated production. If there is one flaw in the The Girl Most Likely To, it is the large use of lip-synced music. While it indeed fits the script and is a suitable, believable part of the story, the prominence of pre-recorded song in the work makes one hanker for a full-on musical.

The Girl Most Likely To is playing through May 13 at Los Angeles Theatre Center. Tickets are available online or via phone at 866-811-4111.