Off-Duty Cops Will Rescue Cats and Kittens on Skid Row 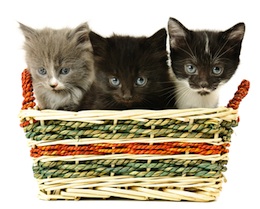 Photo by Roxana Bashyrova via Shutterstock
The Los Angeles Police Department have announced that they will have off-duty officers teaming up this weekend with the non-profit group Voice For The Animals (VFTA) to rescue several cats and kittens who have been living on Skid Row.

The estimated 50 cats and kittens have lived in the area for several years, and have been fed by members of a church at 7th and San Julian that has now closed down.

Because of the church closing, kitties will have to fend for themselves on the streets of Los Angeles; the new property owners have made it clear they expect the cats to be gone from the premises by May 5, according to the LAPD.

While a few of the cats have already been rescued by VFTA, on Saturday morning at around 5 a.m., LAPD officers off the clock will join the group to locate and collect the remaining felines.

VFTA's Executive Directo, Melya Kaplan, says they will use traps that are designed to handle feral and/or scared kitties. The LAPD adds that the rescue operation will see to it the cats are placed in no-kill shelters, evaluated, and ideally adopted into loving homes.